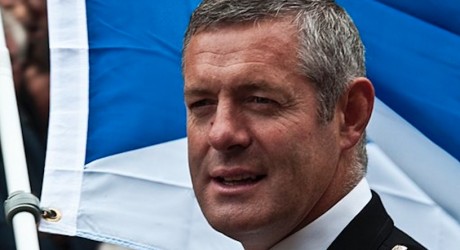 LOCHABER Chamber of Commerce is delighted to announce An Evening with Gavin Hastings, an inspirational and motivational sports and business focused talk from one of the finest world rugby players of his generation, as part of the Lochaber Ideas Week 2017 (#LIW2017) programme – 13 – 17 November 2017.

This event, presented in partnership with VisitScotland, will be staged at The Moorings Hotel, Banavie, near Fort William on Monday 13 November 2017 at 6pm; and will be followed by a Q&A session with Gavin – hosted by Riddell Graham, of VisitScotland.

Former captain of Scotland and The British and Irish Lions, Gavin Hastings, is one of Scotland’s best-known sports and business speakers, dedicated to encouraging and celebrating the application of the values and leadership qualities of elite sport to business.

By providing an uplifting insight into his life as a rugby player, business leader, charity ambassador and sports pundit he will highlight what it takes to be a great team player and leader, showing how we can apply the lessons learned on the rugby pitch to a business environment in order to create a road map to success.

As an amateur rugby player, Gavin Hastings qualified as a Chartered Surveyor working with CB Richard Ellis in London and Glasgow before following his passion and working in sports marketing and setting up his own business on his retirement from international rugby.

He sold the company some ten years later and is now a director of two separate businesses that he has started with former work colleagues. Hi Events specialise in corporate events and hospitality.

Positive Leadership is a consultancy whose mission is to help business leaders, and those on the path to leadership, excel under pressure.

Ideas Week 2017 is sponsored by Nevis Range, hosted by The Moorings Hotel and powered by No Fuss Events. To find out what else is going on during Lochaber Ideas Week 2017 go to: http://www.lochaberchamber.co.uk/events/.

For tickets for An Evening with Gavin Hastings, go to: https://www.eventbrite.co.uk/e/lochaber-ideas-week-2017-an-evening-with-gavin-hastings-tickets-34073287119

Ultimately, Lochaber Ideas Week is a catalyst to stimulate fresh initiatives and ventures, creating new connections and points of collaboration designed to enhance Fort William and Lochaber, the ‘Outdoor Capital of the UK’, as a fantastic place in which to live, work and visit. Lochaber Ideas Week 2017 is sponsored by Nevis Range, hosted by The Moorings Hotel and powered by No Fuss Events!

Gavin Hastings is widely regarded by those in the rugby world as as one of the finest players of his generation and one of the best full backs to ever grace the game. He has been recognised for his accomplishments in rugby with an OBE presented to him in the 1994 New Year’s Honours list whilst also being inducted into the International Rugby Hall of Fame in 2003. He won 61 caps for Scotland, captaining the national team 20 times. He captained The British & Irish Lions during the 1993 tour to New Zealand as well as captaining Cambridge University in the 1985 Varsity match.

Lions coach, Ian McGeechan said of Gavin: “…his greatest asset was to engender confidence in those around him and to lead by example when the opposition had to be taken on.”

As an international player Hastings was prolific for both Scotland and the Lions, having amassed 733 points in Test Match rugby over a ten-year period. He held the record as top scorer in World Cups with 227 points until Jonny Wilkinson passed that total in 2007. He is still the record scorer in Tests for the Lions with 66 points and was Scotland’s leading scorer with 667 points until Chris Paterson overtook him in 2008. Among his highlights were being part of only the third Scotland Team to win the Grand Slam in 1990 and scoring a last-gasp try in Paris in 1995 after 26 years of waiting.