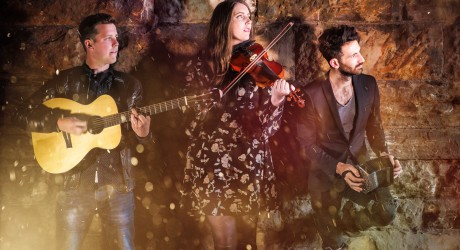 MULTI award-winning Glasgow based trio, Talisk, have been selected as the sole UK act to perform in the official programme at WOMEX 17 World Music Expo in the UNESCO city of music Katowice, Poland, from Wednesday 25 to Sunday 29 October 2017.

The annual, five-day event, described by UNESCO as the most important international professional market of world music of every kind, comprises of a Showcase Festival, a bustling trade fair, a global music conference and a film programme.

Competition to perform is fierce with hundreds of acts from across the globe vying for a slot in front of over 2,500 music industry professionals from 90 countries.

Presenting an enthralling repertoire of traditional Scottish and Irish tunes alongside contemporary and original compositions – across concertina, fiddle and guitar – Talisk were selected by the WOMEX Jury alongside artists from 36 countries.

Each act aspires to enhance their international career by showcasing music from traditional to new global underground, embracing folk, roots, local and diaspora cultures, and urban and electronic sounds from across the globe.

Alan Morrison, head of Music at Creative Scotland, said: “Talisk are arguably the most exciting young Trad band in Scotland right now, and the timing of their official showcase concert at WOMEX couldn’t be better. In just over a year, Mohsen Amini has gone from BBC Radio Scotland Young Traditional Musician of the Year to a nominee for Musician of the Year at the BBC Radio 2 Folk Awards.

“The lightning-fast fingers of this concertina virtuoso and the sheer vitality of the whole band are going to blow the WOMEX crowds away.

“Performing at the festival will provide an opportunity for Talisk to connect with world music executives, leading music managers, festival and venue programmers and recording company bosses, leading to possible deals and further international performances.”

Mohsen Amini, from Talisk, said: “We’re very excited to be heading over to WOMEX in Katowice in October. We’ve been aware of the event for a few years now, and the huge difference that it can make to artists’ careers throughout Europe and beyond.

“With our second album coming up in 2018, and a number of other exciting developments in the pipeline, the opportunity to showcase at one of the world’s largest conferences for folk and world music really has come at an ideal time in the band’s career.

“Over the years, we’ve played at a good few European festivals that we’ve been introduced to through projects such as Showcase Scotland, and generally find that our music connects really well with international audiences – and especially those who are up for a bit of a party!

“We’re really looking forward to seeing what WOMEX and Katowice have in store, showing them and the world what we do, and connecting with many more people and opportunities for years to come.”

Creative Scotland are partnering with British Council and the other UK nations England, Ireland and Wales to present Horizons at the WOMEX International Trade Fair.

Horizons celebrates and promotes the UK’s wealth of music traditions and cultures within a world music market.

The partners will coordinate a presence at the Trade Fair at Katowice’s International Conference Centre supporting talent to reach new international markets through promotion and advocacy. There will be an opportunity to meet Talisk at the Scotland stand on Friday 27 and Saturday 28 at 1400.

* Nominees in the 2017 BBC Radio 2 Folk Awards’ Horizon Award, and winners of the 2015 Young Folk Award, Talisk are one of the fastest rising bands on the UK folk scene. Mohsen Amini (concertina), Hayley Keenan (ﬁddle) and Graeme Armstrong (guitar) create a captivating, energetic and dynamic sound that, in just a couple of years, has earned them multiple award wins, unwavering nationwide media praise, and standing ovations across the country. Atop their collective titles, Amini was the 2016 BBC Radio Scotland Young Traditional Musician of the Year, adding to a trophy cabinet that far belies their years. So too does their touring history, though – with appearances at world-leading festivals including the Cambridge Folk Festival, Denmark’s Tønder, Celtic Colours in Cape Breton, Fairport’s Cropredy Convention and Celtic Connections, as well as countiess others alongside live sessions on both BBC Radio 2 and BBC Radio Scotland’s ﬂagship folk programmes. With further tours and showcases throughout Europe and the US, theirs is a star ﬁrmly, and rapidly, on the ascent. Find out more: talisk.co.uk | facebook.com/taliskmusic | @TaliskMusic | YouTube

* Creative Scotland is the public body that supports the arts, screen and creative industries across all parts of Scotland on behalf of everyone who lives, works or visits here. We enable people and organisations to work in and experience the arts, screen and creative industries in Scotland by helping others to develop great ideas and bring them to life. We distribute funding provided by the Scottish Government and the National Lottery. Find out more: creativescotland.com | facebook.com/CreativeScotland | @creativescots