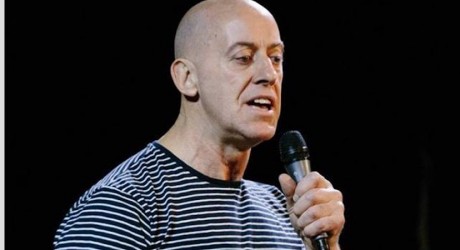 NON-stop hilarity is on the cards at Drygate Brewery, Glasgow, on Friday 06 October when Gary Little, whose sets, stories and jokes have earned him the reputation as one of Scotland’s top comedians, headlines the first Gilded Balloon Comedy at Drygate, as the monthly club night returns for the autumn.

He will be joined on the Drygate stage by Hamilton-based comedian, John Gavin, who offers hilarious tales of his domestic strife with his wife and three daughters.

London-based Italian comedian, Luca Capani, a class act bracing himself for Brexit, who won The Gilded Balloon’s So You Think You’re Funny competition in 2015, is also on the bill.

Compere for the first Gilded Balloon Comedy night of this season will be the thoroughly engaging Glasgow-based comedian, Ray Bradshaw.

Despite his imposing physical presence – a 6’ 2” skinhead – Gary Little is consistently funny act, blessed with that special brand of ‘Weegie banter': a gossipy, sharp-tongue with countless hilarious tales to tell.

As a skilled storyteller, he has that rare gift in which to turn mundane, every-day experiences into pure comedy gold, which will have the Drygate audience simply crying with laughter.

When Little speaks from the heart about such things as his man-of-few-words father, religious figures and sudden deaths, this is when he really shines. He has an incredibly personable, relatable style, forcefully opinionated. However, with unflinching honesty and just a hint of vulnerability, he is not afraid to be up front with his failings.

John Gavin, a Hamilton father of three daughters, started off his comedy career in 2008 after his wife entered him for a stand-up competition without his knowledge.

A year on from this, John went on to win Scottish Comedian of the Year. He offers hilarious tales of his domestic strife, essentially a 6ft tattooed man who has been subjected to far too much High School Musical and pink fluffy toys.

He also takes tangential arcs away from home life to tackle the various wrongs that that confuse him and keep him awake at night like foxes, men’s health and washing machines.

Luca Capani, the award-winning Italian comedian who was too funny for his own country, is not overly interested in the tough political and social questions of the world. Instead, he focuses on easier questions like, Who am I? Open, guileless and refreshingly honest – Luca’s material is always a seamless match with his engaging personality.

Along with the endearing self-deprecation, his stories are heavy on autobiography. His tales of death and the time his mother took him to photograph a corpse, hypochondria, Catholicism, lust and a terrified trip to the STD clinic, call centres, exhumations and Amsterdam encounters are both painfully funny and enchanting.

Hailing from Glasgow, Ray Bradshaw is one of the funniest and most dependable acts on the Scottish comedy scene. His utter joviality and friendliness, coupled with witty and unexpected asides and great audience interaction, make him a real ‘people pleaser’.

As a fluent ‘signer’ Ray became the first comedian to perform a show in English and British Sign Language simultaneously at this year’s Edinburgh Fringe.

Audiences can also enjoy the popular dinner and comedy packages that have the craft beer kitchen and bar – The Vintage at Drygate – take on the role of front of house hosts.