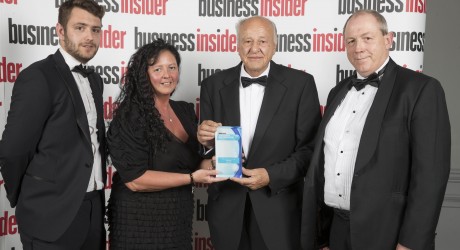 The gala event was held at Glasgow’s Grand Central Hotel on October 12th where winners across seven categories were announced.

Dacoll Group is a leading provider of IT Managed Services and ANPR Systems across the UK.

Founded in 1969, it was among those selected by Insider Scotland based on the company’s ongoing commitment to the development and training of staff to take on new roles, and its use of ‘employee champions’ to facilitate their recent business model change from being product focused to service.

Dacoll Group founder and chair, Brian Colling, accepted the award with one of the company’s apprentices, whose father has worked for the Dacoll for over 30 years.

“It was an enjoyable evening and I thank the judges and the organisers for such a well-organised event,” said Colling.

Dacoll won the award in the category which included several other companies such as J&A Mitchell and Co Ltd.

The SME Employer of the Year category was open to all Scotland-headquartered SMEs with between 40 and 149 employees.

Judges reviewed each candidate and rated them based on a number of variables including opportunities for employees to learn and develop and make progress in their career.

Clarke noted the companies nominated were those who have put their employees at the heart and soul of their business and gone the extra mile to put their employees first. Symon commented on the importance of the evening as a recognition of best employment practices and the companies putting those practices to work in order to make their business great.

Founded in 1969, the company is headquartered in Bathgate, Scotland with operations in the US and UK.

MEDIA RELEASE issued by Dacoll Group. You too can share your stories (aka press or media releases), on this site. Email here for more information.