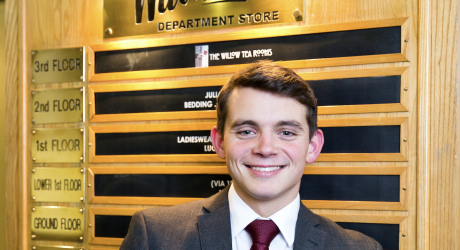 IT is recognised as Scotland’s oldest and biggest, independently-owned chain of department stores – with 11 across the country.

And now the family-owned Glasgow-based business has marked the arrival of the fifth generation Watt family member to join the firm.

At 22, Strathclyde University graduate, William Watt, is five years older than the age his father, Willie, the company’s current managing director, was when he joined the family firm.

William who is the great, great grandson of the company’s founder, Allan Watt, is immersing himself in all aspects of the retail business, joining the company as a trainee manager covering a number of the stores.

He described his appointment to the family firm as “an exciting challenge” and added: “I’ve grown up learning all about Watt Brothers from my dad and my grandfather so it seemed a natural progression for me to add another generation to the business.

“I’m hugely proud of the company’s legacy and place in Scotland’s retail history and will focus on keeping the momentum going.

“I’ve joined a really experienced team who have years of retail knowledge to share and I’m getting involved in every department from warehouse to buying and from marketing to the sales floor.

“I want to and believe I need to be able to turn my hand to any aspect of the business.”

Allan, a Lanarkshire farmer’s son, had earlier set up a small drapery shop primarily to bolster the family’s income which was beginning to drop.

An initial foray into the bustling city environment of Glasgow saw Allan Watt open up a shop in the city’s Elmbank Street where he specialised firstly in selling ribbons and lace.

In 1915, Watt Brothers was officially formed as a limited company – the name remains and the business continues today more than 102 years later.

The business then moved into the iconic store on the corner of Glasgow’s Sauchiehall Street and Hope Street where it has traded for more than a century.

The original fashion business was popular in an age when department stores were designed as places where customers could revel in an atmosphere of luxury. Fashion was the company’s staple product – and its customers flocked to the store for the latest designs in everything from lingerie to ball gowns.

In an era when Glasgow housed no fewer than 40 department stores, 13 of them were located on Sauchiehall Street – so competition for attracting customers was fierce.

Big-name stores such as Pettigrew and Stephens, Copeland and Lye, Daly’s and Hendersons competed with Watt Brothers on the prime retail location of Sauchiehall Street. Only Watt Brothers remains in business today.

William said: “Our business has changed dramatically since it first opened its doors on Glasgow’s Sauchiehall Street when the focus was exclusively on high end ladies’ fashions.

“Steered by my father, we have had to evolve in new directions as a business and include a wider range of great value products in a department store style setting that has greater appeal to today’s consumer.

“We’re also fortunate to have a great team working with us who are enthusiastic and focused on delivering what our customers want. I remember coming in when I was about to start as a student and thinking we had stock at great prices – now they’re even better and often lower than internet prices.”

Current MD, Willie Watt, said: “The retail environment is currently really tough and now having expanded to 11 stores we’re working hard on delivering a good retail experience for our customers, many of whom are long-standing.

“We’re introducing new lines, more big-name brands and we’re about to launch our first-ever TV ad campaign aimed at spreading the news about what Watt Brothers has to offer.

“These are tough but exciting times and I’m delighted to have William on board now too. We’ve promised the rest of the family we won’t talk shop when we’re at home – well, not too often!”

MEDIA RELEASE issued by PDS Media. You too can share your stories (aka press or media releases), on this site. Email here for more information.