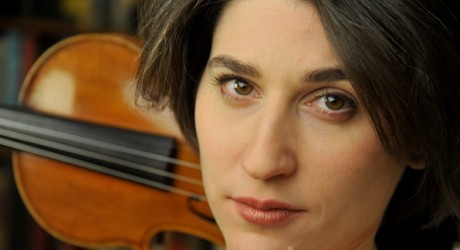 Roffman will share the role with current leader, Maya Iwabuchi, who was appointed to the position in 2011. Roffman succeeds previous leader, James Clark, who departed in 2015.

Graduate of New York’s Julliard School of Music, Roffman has performed with some of the world’s major symphony and chamber ensembles. In addition, she has forged an impressive career as a soloist, making her debut in 1996 with the New Jersey Symphony Orchestra, made her Carnegie Hall debut with Itzhak Perlman performing Vivaldi’s Concerto for Four Violins in 2004.

Roffman is an advocate of combining performance and education, and is the founder and artistic director of ClassNotes, a chamber ensemble dedicated to introducing school pupils to classical music through interdisciplinary school residencies and performances.

Roffman joins the RSNO as the 21st leader of Scotland’s national orchestra, in early 2018.

Her first appearance with the orchestra was with music director, Peter Oundjian, in a programme which included the Scottish premiere of James MacMillan’s Little Mass, Szymanowski’s Violin Concerto No2 (with soloist, Nicola Benedetti) and Berlioz’ Symphonie Fantastique, in 2016.

Said Newly-appointed RSNO leader, Sharon Roffman: “From the first note I played with the RSNO, I felt an instant camaraderie with the musicians and a common artistic vision.

“I’m so excited to join the RSNO team, discover Glasgow and connect with the community here, and, most of all, I’m proud to share the stage with these wonderful colleagues with whom I look forward to many moments of exhilarating music-making together!”

Added RSNO music director, Peter Oundjian: “Sharon is such a gifted musician and a marvellous fit for the RSNO, and I’m delighted that she has accepted the position.

“Her experience and tenacity will bring increased strength to our unit. Furthermore, her enthusiasm for music education is totally aligned with the RSNO’s commitment to broadening the appeal of orchestral music. I very much look forward to welcoming her to the orchestra.”