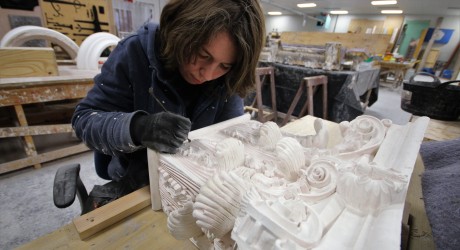 A TEAM of 20 Scottish-based trainees have been selected for an intensive skills development training programme on season four of the award-winning TV production, Outlander, 15 of which will be taking their first step into the film and TV industry.

Supported by the National Lottery through Creative Scotland, Creative Skillset, and match funded by Sony Pictures Television, the programme fosters practical production skills and provides the professional experience required to enable the next generation of screen talent to enter and progress careers within the industry.

Working alongside highly-experienced crew members on location and in Wardpark Studios, Cumbernauld, for the next five to eight months the trainees will develop skills in a variety of creative and technical roles.

The trainees, aged from 18 to 32 and many of whom are brand new to the industry, have been selected from over 1,400 applicants for roles across camera, costume, design, assistant director, art department, effects and production.

On being selected, Kirsty McCabe, season four trainee, commented: “Having been a theatre designer for nine years, I felt really comfortable where I was but knew I needed a new challenge.

“When I spotted the production design traineeship I knew it was the right opportunity to take what I knew and move forwards into TV and film.

“The traineeship has been excellent so far, I’ve been supported in learning about the industry and pushed forwards with my skills. It’s a great start to a new chapter of my freelance life and I’m really excited to see where it leads me.”

Aiming to build and retain vital screen skills for Scotland The Outlander Training Programme has now provided skills development for nearly 100 people across seasons one – four, many of whom have secured work on feature films and high end TV such as Churchill, Clique, Shetland, Etruscan Smile.

Aina Sabate-Giralt, continuity trainee, Outlander season one and two, said: “The traineeship on Outlander was the only way to put in practice all that I had learned on the script supervisor’s course in London. Without that opportunity, I doubt I would be where I am today. Since finishing the scheme in 2014, I have had the opportunity to ‘go solo’ on TV shows like River City, and Loch Ness, feature films like Churchill and The Etruscan.”

Director of Screen at Creative Scotland, Natalie Usher, commented: “Hosting productions such as Outlander not only generates significant income for Scotland but also boosts our screen industry by creating an opportunity to train the next generation of directors, producers, craft and technical crew.

“The speed at which many of the graduates have gone on to find employment demonstrates the quality of training being offered through this Programme. The Outlander Trainee Programme is one of a number of valuable initiatives taking place across Scotland to develop a skilled and diverse workforce, an ambition outlined in our Screen Strategy.”

Outlander producer, David Brown, said: “This is the fourth year of the groundbreaking Outlander training scheme and we are delighted that its success has made a significant contribution to the industry in both Scotland and the UK as a whole.

“We thank all our partners who have contributed so generously and wish all the best to past graduates and our current input. We look forward to working with them now, and on many future productions.”

The Outlander season four trainees are:

Five trainees are stepping up into more advanced roles having previously worked on season three:

Season four continues the epic romantic adventures of Claire and Jamie Fraser in a new world.

Seasons one – three of Outlander is available to stream on Amazon Prime Video in the UK.

About The Outlander Trainee Programme

To enter the programme, trainees submitted their CVs to Outlander. Shortlisted applicants were then interviewed by a variety of heads of Department. Those demonstrating commitment and passion for working across craft and technical departments in TV drama, and skills relevant to the trainee role they were applying for, were selected to support their development and equip them with the skills necessary to sustain a career in the industry.

Creative Scotland is the public body that supports the arts, screen and creative industries across all parts of Scotland on behalf of everyone who lives, works or visits here. Creative Scotland distributes funding provided by the Scottish Government and the National Lottery. Creative Scotland’s Screen Strategy focuses on the five key areas of screen education, talent and skills development, screen development and production, inward investment and co-productions and distribution, exhibition and audiences, detailing priorities for the sector across these areas. For further information about Creative Scotland please visit www.creativescotland.com. Follow us @creativescots and www.facebook.com/CreativeScotland

Creative Skillset is the industry skills body for the Creative Industries. It works across film, television, radio, fashion and textiles, animation, games, visual effects, publishing, advertising and marketing communications. It works with and for the creative industries to develop skills and talent, supporting productivity and employability. Creative Skillset’s Trainee Finder is a service that matches trainees with companies across the UK’s animation, film, games, high-end and children’s TV and VFX industries.

For further information about this programme please visit: http://creativeskillset.org/who_we_help/creative_businesses/access_new_talent/trainee_finder

Screen NETS is a partnership between Screen Academy Scotland, Edinburgh Napier University, Hit the Ground Running and BECTU with support from Creative Scotland. For more information on Screen NETS: http://www.screen-nets.com