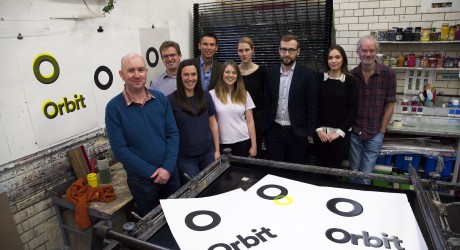 A SCOTTISH communications agency, based in Edinburgh, has signalled ambitious future growth plans by adding four new members of staff to its roster, expanding its services, rebranding and launching a new website (Image attached).

Orbit – known for its expertise in public affairs, public relations and community engagement – has taken on additional staff which will enable the company to offer a broader range of services including brand development, digital marketing, animation and website design.

Bringing a wealth of experience and knowledge working with global brands in sectors including tourism, food and drink, housing and the Third Sector, the new team will complement Orbit’s existing media relations, community engagement and public affairs offering, allowing the company to offer comprehensive and creative communications packages under one roof.

The new team members are (see Notes to editors for biogs):

The expanded team has already created an exciting new brand and website – www.orbit.scot – to better engage with potential clients.

Orbit managing director, Alex Orr, said: “Orbit is delighted to be able to announce this expansion of our services and team.

“As a result, we are now well-placed  in Scotland to help clients build their brand and enhance their reputation by offering an integrated package incorporating PR, public affairs, digital and design.”

Director, Graeme Downie, said: “John and his team have won numerous awards in previous roles and will bring an incredible range of skills and experience to Orbit, having worked with large organisations and government as well as major brands including Glenmorangie, Louis Vuitton and Chanel and third sector organisations ranging from charities to housing associations.”

Director, Alex Bruce, commented: “We will continue to seek out opportunities for further expansion in the future, keeping us at the leading edge in our sector while providing the best outcomes for our clients.”

Potential clients will have the chance to learn more about how Orbit can help them to build their brand and enhance their reputation at a free breakfast seminar targeted at Scotland’s tourism, hospitality and food and drink sectors, taking place on the morning of Friday 24 November in central Edinburgh.  More details and the opportunity to book tickets are available at www.scottishtourismseminar.eventbrite.co.uk

Orbit’s free seminar will take place from 8am on Friday 24 November. Anyone interested can register at www.scottishtourismseminar.eventbrite.co.uk

John has worked in the design and advertising sector for over 20 years. He has art directed major projects for global brands, Scottish Government and latterly, some of Scotland’s more ambitious charities. An artist, designer, published academic and agitator, John’s work recently came to notoriety on the blog site, Buzzfeed.

Heather is a graduate of the Glasgow School of Art and a creative Graphic Designer with over ten years’ experience.  Working as a Mid-weight Designer for the past eight years, Heather has worked with big Scottish brands including Paterson Arran and Scotmid Co-operative. With two toddlers, staying up late to party can be an effort but at least once a week, an effort worth making. Who wants to grow up anyway!?

Emma is a designer with a visual mind and super woman illustration skills. She loves clean, minimal design as much as she likes getting her hands dirty and make a mess with some paint. She is also a published comic book author and is obsessed with pine trees.

Kiera is a passionate Designer with pixel perfectionism. She has a love for Saul Bass, 80s films and 90s Hip-Hop. She believes in meaningful design with a strong idea and that it’s all about the concept. She can often be found cycling around Edinburgh pretending to know the rules of the road or in any establishment that allows her entry along the Cowgate.

The company has won numerous awards over the years, most recently a Silver Award in the 2017 Scottish PRide awards for work in the cultural sector with the Saltire Society and the 2017 Young Communicator of the Year award, which went to account manager, Sarah Robertson.

MEDIA RELEASE issued by Orbit. You too can share your stories (aka press or media releases), on this site. Email here for more information.