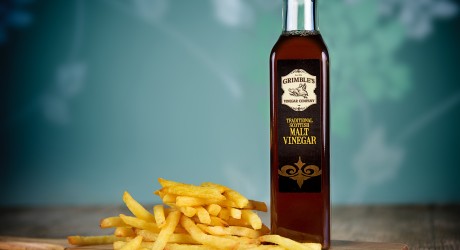 The range includes what is thought to be the first traditional craft malt vinegar produced in Scotland since the 1980s, alongside a selection of cask-aged speciality vinegars and sweet apple syrups.

The vinegar range has been designed by Chris Harrison of Waulkmill Cider as a sister brand to his Scottish craft cider business.

Chris said: “There has been such a revival in craft ale in recent years that we thought it was time to revive craft vinegar production in Scotland.

“We’ve been making traditional apple cider, balsamic and wine vinegar for a number of years, and now have a good selection of matured speciality cask-aged vinegars that are ready for sale.

“So we decided it was time to reinvent the traditional malt vinegar too.

“By going back to basics, working with some skilled craft brewers, we have developed a traditional malt vinegar that has a rich, authentic flavour that speaks of its craft ale origin.”

The range will be unveiled at the BBC Good Food Show as a Producer Bursary winner after judges praised the traditional manufacture and the use of real ingredients throughout the Grimble’s range.

Chef Scott Smith of Norn, the Leith restaurant renowned for championing Scottish producers, has been using Grimble’s cider and cask-aged speciality vinegars for some time.

He praised the authentic flavours across the range that are the result of slow maturation and traditional production techniques, saying: “We’ve been using Chris’s ciders and his vinegars since we opened the doors at Norn.

‘You can always depend on his vinegars being consistently well crafted. They’ve had the proper skill, technique and time put into them to make them head and shoulders above any other vinegars I have tried in a long time.”

The new Scottish craft malt vinegar will go on sale at the BBC Good Food Show exclusively from the 30th Nov – 3rd Dec.

It will then be available through selected retail outlets and by mail order from www.grimblesvinegar.com.

A selection of product photos can be downloaded from: https://www.dropbox.com/sh/hwkzgrsb4fn94my/AAAYOynHSX8pYd-1NnLYVZjaa?dl=0

Photos from the launch of Grimble’s at the Good Food Show will be uploaded to this Dropbox in the afternoon of Thursday 30th November.