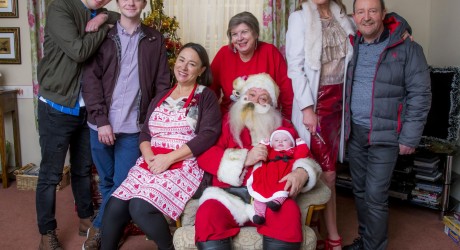 A PACKAGE of programming full of comedy, drama, documentaries and music will bring festive cheer to BBC Scotland audiences this yuletide.

The broadcaster today (Wednesday 6 December) released its Christmas and Hogmanay TV and radio schedules that are packed with a choice of goodies to suit all tastes.

The laughs are in abundance down Latimer Crescent when Beth (Arabella Weir) finds her plan for a quiet Christmas dinner go awry in Two Doors Down. This festive special on Boxing Day on BBC Two Scotland comes ahead of a new, six-part series which will start in early 2018.

Cameron McNeish explores hidden gems of rural Scotland with a new two-part Roads Less Travelled series on BBC Two Scotland on Wednesday 27 and Thursday 28 December when he journeys through the Heart of Scotland, beginning at Ben Rinnes and finishing in the wild Cromdale hills.

The Hogmanay line-up on BBC One Scotland includes Scotland’s Big Night Out in which stand-up comedian and presenter Iain Stirling explores the history of Saturday nights out across the country since the 1950s.

And the tough-tackling Only An Excuse? team, with Jonathan Watson leading the line, is back for its traditional fixture, casting a satirical look at the last 12 months on and off the pitch.

Jackie Bird waves goodbye to the old year on Hogmanay Live 2017 from the Old Fruitmarket in Glasgow where her guests include KT Tunstall. In Edinburgh, Roddy Hart will be joining thousands of revellers and the programme will also feature Rag’n’Bone Man who is headlining the capital’s Concert in the Gardens.

In River City on BBC One Scotland, on 2 January, Lenny (Frank Gallagher) is shocked when a plot comes to light. Meanwhile, he steps in to save the day for Lydia (Jacqueline Leonard) after her Hogmanay entertainment pulls out, giving her an unforgettable start to the New Year with a special cameo appearance from singer songwriter, Eddi Reader.

Among the Christmas Day highlights on BBC Radio Scotland is one-off drama, The Fountainbridge Spy. Writer David Ashton imagines how a young Sean Connery might have been tried and tested to show he was the man for the 007 role. Emun Elliot, who was in the recent BBC One drama, Trust Me, takes the lead as Sean.

In I Will Tell You This! My Life with Rab C Nesbitt, writer Ian Pattison goes back to Rab’s spiritual heartland in Govan to rediscover the inspiration behind his iconic comedy creation.

Greg Hemphill profiles one of Scotland’s most famous and successful writers in Alistair MacLean – Master Storyteller and in Picking up the Pieces – The Average White Band Story, the group’s long-time associate and former manager of Simple Minds, Bruce Findlay, charts how they became Scotland’s most successful soul music export.

In Stan Laurel’s Glasgow, actor, Alex Norton, goes on a tour of 1900s Glasgow as seen through the eyes of the comic legend who would leave the city an unknown and return as a global star.

On Boxing Day, Julia Sutherland presents The Mystical Mutt, the story of how new authors, Lyn McNicol and Laura Jackson, decided to go it alone and created a successful children’s book series.

Bryan Burnett will see in the bells in style on The Hogmanay Show which features live music from the Cask Strength Ceilidh Band with Fiona Hunter.

The New Year’s Day schedule includes Harry Potter’s Edinburgh in which presenter Sean Biggerstaff – AKA Quidditch captain, Oliver Wood – travels through the capital exploring why people feel the need to experience a bit of magic in the real world.

Billy Differ sits down with a pop legend for Sheena Easton in Conversation and hears about how she spends her time between West End appearances, family life and how her singing ambitions began.

BBC Alba’s Ceilidh na Bliadhn’ Uire (Hogmanay Ceilidh) this year comes from the Misty Isle. Artists and musicians joining presenters, Cathy Macdonald and Niall Iain Macdonald, for a lively musical session in the run up to the bells and into the wee small hours include Art Cormack, Mànran and The Glenfinnan Ceilidh Band.

Donalda MacKinnon, Director, BBC Scotland, said: “There’s something for everyone in this fantastic selection of programming. Our audiences traditionally come to us in big numbers for the festivities and we hope they’ll enjoy our Christmas and Hogmanay offerings as much this year. There’s a great mix of comedy, drama, documentaries and music to keep the festive season fizzing.”