Media release: What, where and how in whisky 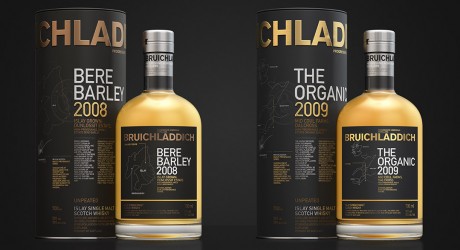 SINGLE malt Scotch whiskies have traditionally been presented accompanied by age statements, but, while age is interesting, it is by no means the only determinant of quality or style in Scotland’s ‘national drink’.

Other factors that have a huge influence are the type and location of the casks in which the whisky is matured, and also the provenance of its fundamental raw material, the barley from which it is made.

On Islay, Bruichladdich Distillery have been working to explore the potential for variety and nuance in whisky by treating barley in a manner similar to the way that winemakers treat grapes.

That is to say they are interested in the ‘What, Where and How’ – the variety, origin and growing regimes employed to bring home the grain.

We are used to seeing grape variety, origin and vintage specified on bottles of wine, as a result – and we now often see ‘organic’ or even ‘bio-dynamic’ designations on wine bottles as well.

Bruichladdich have recently released two single malts that illustrate how they embrace this approach.

The first is ‘The Organic 2009’ which was distilled using grain grown organically by William Rose at his ‘Mid Coul Farm’ near Inverness. This whisky is certified ‘organic’ from barley to bottle by the Biodynamic Association and is described as being “deliciously creamy, with the barley notes very much to the fore,” by head distiller, Adam Hannett.

The second release is Bere Barley 2008 which was distilled from a grist prepared from an ancient six-row variety of the grain grown at Dunlossit on Islay.

Hannett tells us of a “honey-soft texture with rich and malty sweetness and great depth”.

The aim with all these releases is not to ask whether one is better than any other, but simply to demonstrate that there are flavour differences and that these are interesting for their own sake.

These include drams created from six-row and the more familiar two-row barley varieties (the what), barley grown on the Scottish mainland, Islay and Orkney (the where), and grain grown using organic, minimal intervention and conventional farming techniques (the how).

18,000 bottles of each of the new whiskies have been released for sale in specialist outlets all over the world.