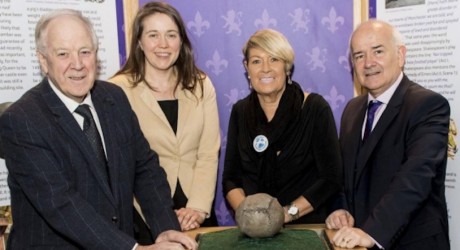 A NEW charity, Walking Football Scotland, was officially launched on 6th December by Aileen Campbell, Minister for Public Health and Sport at an event in Stirling.

The new organisation has been set up to encourage older players to stay involved in physical activity for longer and for those looking for a fun and social way to stay active.

A slower version of the beautiful game

Walking Football is the slowed-down version of the beautiful game. The sport has grown rapidly across Scotland by allowing people to reignite their passion for football, despite age, injury or illness, simply by slowing things down.

The new organisation already has over 45 member organisations who run over 70 sessions every week.

The project has been co-ordinated by partners including Age Scotland, the Scottish FA, the SPFL Trust and Paths for All as part of the Scottish Government’s Active Scotland strategy to encourage more people to undertake physical activity.

“I took part in a game at this summer’s Walking Football Festival in Glasgow and thoroughly enjoyed myself. I can vouch for walking football as a great way to get active, have fun and socialise all at the same time.

“Walking in itself can reduce the risk of a range of health conditions and promote better mental health. The additional social benefits that come from playing in a football match make this an excellent and inclusive game which I am proud to support.”

“Walking Football is a fantastic game. I play myself and would urge anyone and everyone to find their local centre go along and give it a try. The groups are very welcoming, and anyone can take part no matter age or ability. You don’t need football boots or special kit.”

Ian Findlay chief officer, Paths for All, said: “We’ve long been advocates of walking as the way to a happier, healthier nation and walking football is the perfect way to encourage people to get off the sofa and into a more active lifestyle again.

“With a love of football in the blood of so many Scottish people, we’re delighted to work in partnership to help as many people as possible continue to enjoy the beautiful game despite age or injury and to reap the benefits.

“There is a genuine buzz for the sport’s future and we’re delighted to have played an integral role in the development of Walking Football Scotland and we look forward to seeing it grow and flourish.”

Andy Gould, head of Football Development at the Scottish FA, said: “Walking Football is a core activity in the Scottish FA’s Grassroots Football strategy, the One National Plan, and it is heartening to see the growth of a sport that helps to deliver benefits such as increased physical activity, mental wellbeing and our ultimate vision of providing ‘Football for Life’.

“We look forward to working with Walking Football Scotland, our regional network and our extensive links to clubs and other stakeholders to continue to support the growth of Walking Football in future.”

With Walking Football being particularly appealing to older adults, Walking Football Scotland invited their oldest player to the launch as well as having the oldest football in the world available to view.

The oldest football in the world, which dates to 1540 and is rumoured to have been played with by Mary Queen of Scots.

Attending the event was Bert Cunningham, Walking Football Scotland’s oldest player. At 88, he is an advocate of the game for helping people to stay active into older age.

Asked why he got involved, he said: “I saw an advert about a new session starting at Meadowbank in January 2015 so I went along. I thoroughly enjoyed the experience and have been a regular ever since, rarely missing the weekly sessions. They are a good bunch of lads we all go for a cup of tea and a good chat after the game which makes it a great social occasion.”

Two of Scottish Football’s most inspirational figures have been appointed patrons of the new charity. Rose Reilly, World Cup winner and trailblazer of women’s football, and ex-Scotland manager, Craig Brown, both attended the busy event to lend their support to Walking Football Scotland.