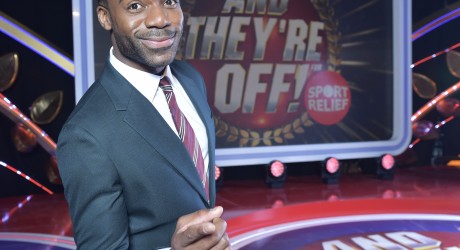 ‘And They’re Off For Sport Relief’, presented by Ore Oduba, will feature a host of celebrities and famous former athletes

STV Productions is producing a new six-part Saturday night game show for BBC One. The show will launch in the run up to Sport Relief 2018, with the first episode airing on 6th January 2018.

The series, And They’re Off For Sport Relief, will be presented by sports presenter and Strictly Come Dancing 2016 champion, Ore Oduba. The programme will see a host of famous faces take part in fun – and unpredictable – obstacle courses, including running through mud and hurtling down giant water slides before a final showdown.

Celebrities who have donated their time and best sporting efforts include former athletes Michael Owen, Mike Tindall and Helen Glover as well as celebrities such as Penny Lancaster, Stacey Solomon, Saira Khan and Russell Kane.

Members of the public will play along from the comfort of the studio with Ore, where they need to correctly predict which celebrity will triumph during each race in order to win an experience of a lifetime.

The series will also feature films of visits to a number of Comic Relief funded projects, including Tom Daley visiting health projects in Malawi and Stacey Solomon visiting a maternal mental health project in the UK.

And They’re Off For Sport Relief is being produced by STV Productions with the format co-developed by Motion Content Group. It has been commissioned by controller of BBC Entertainment Kate Phillips and commissioning editor, Entertainment and Daytime, Jo Street.

STV Productions head of Entertainment, Gary Chippington, who is executive producer of And They’re Off For Sport Relief, said: “We’re delighted to be making this unique show for BBC One – it’s a great mix of a dramatic quiz with even more dramatic races.  And, it’s all for a great cause – so even more incentive to tune in and cheer on your favourite!”

Kate Phillips, controller of BBC Entertainment, said: “And They’re Off For Sport Relief is muddy, funny, family viewing and of course it will be raising money for Sport Relief 2018, truly a win win!”

Ore Oduba said: “I can’t think of a more fitting way to champion another amazing Sport Relief campaign than And They’re Off… Top sport stars, celebrities up for a challenge and a load of brilliant games that will certainly test their mettle!”

It was announced earlier this year that Sport Relief 2018 will be live from MediaCityUK for the first time ever on 23rdMarch.

Sport Relief brings the nation together to get active, raise money and change lives. Since 2002, Sport Relief has raised over £335 million. The money raised by the public will be spent by Comic Relief to tackle the critical issues affecting people across the UK and the world. This year, Sport Relief culminates in a week of activity from Saturday 17th to Friday 23rd March, leading to an unmissable night of TV on the BBC.

Comic Relief is a UK charity which aims to create a just world, free from poverty – where everyone is safe, healthy, educated and empowered. Since 1985, Comic Relief has raised over £1 billion. That money has helped, and is helping, people both at home in the UK and across the world. For information about Comic Relief and the work it carries out, please visit www.comicrelief.com  Comic Relief, registered charity 326568 (England/Wales); SC039730 (Scotland)

In entertainment, the company has produced five series of Catchphrase for ITV and two series of Safeword  for ITV2, as well as reality format Tour de Celeb for Channel 5 and The Dressing Room for UKTV’s entertainment channel W.

STV Productions has a track record of producing quality returnable drama series including Taggart and Rebus with ambitions to build on this reputation. In the last five years it has produced Fast Freddie and The Poison Tree, both for ITV, and the business recently secured its first BBC drama commission – four part thriller The Victim for BBC One, which is now in pre-production with filming taking place in Scotland in spring 2018.