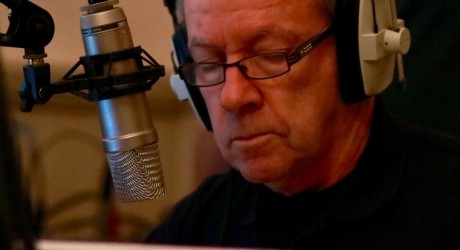 The Mike Ritchie On Sunday Show is the Best Radio Show in a vote run by the influential Americana-UK website.

Glasgow-based Mike, a runner-up to BBC legend, Bob Harris, in this category 12 months ago, was confirmed as this year’s winner by website editor, Mark Whitfield, who said: “I’m delighted that Mike’s Celtic Music Radio programme has been voted Best Radio Show how by Americana-UK readers this year.

“He’s a fantastic ambassador for Americana in the UK and, along with Bob Harris, probably does more for the genre than anyone else on air.

“He’ll often play not just established names but up and coming acts who might struggle to get exposure elsewhere. Well done to Mike.”

Mike, whose show goes out live every Sunday between 4 and 6 pm, and features a mix of Americana, alt.country, roots, bluegrass and singer/songwriters, said: “I am unbelievably pleased for Celtic Music Radio 95FM and totally taken aback to learn that so many people rate my show so highly.

“I love producing and presenting it, so a huge thanks to all the Americana-UK readers who voted for me and to all who listen in regularly on Sunday afternoons for their warmth and genuine encouragement.

“I am also really grateful to all the talented bands and singer/songwriters plus the music label promo teams who suggest such terrific, new music for me to play.

“My fellow volunteers at the station are brilliant – it’s been fun and they have helped me endlessly and enormously over the past four years.

“Finally, no-one is better than ‘Whispering Bob’ – who’s won the award many times – least of all me. He is a brilliant broadcaster, a legend who has been at the forefront of radio music for so long and I’m a big fan.

“While I’m a newcomer by comparison, I’m chuffed to be an award-winning broadcaster, like him now.”

Chair of the charity-status, Glasgow-based station’s board of directors, Alex Jenkins, said: “This is a great accolade for Mike – for one of our presenters to win an award through a public vote is a real achievement, especially when a broadcasting giant such as Bob Harris is in the mix.

“All of us at the station know how much Mike loves the music he plays and the hard work he puts in to each and every show.

“He includes brand new music and he’s keen to support new acts, with many from Scotland. As a result, more and more people are listening in.

“All of us at Celtic Music Radio are absolutely delighted by this result and the recognition Mike’s win gives us. It’s a special moment when a community station like ours gets recognition in this manner.”

MEDIA RELEASE issued by Celtic Music Radio. You too can share your stories (aka press or media releases), on this site. Email here for more information.