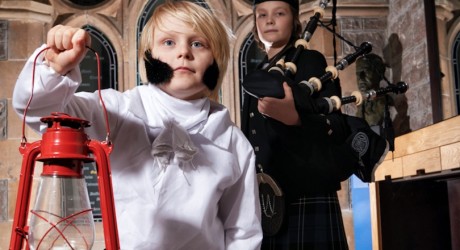 Tim’rous beasties of all ages are welcome to celebrate Rabbie Burns in true Scottish style with fun, games and ceilidhs aplenty.

This year’s prolific celebration will include an extra special schools event to kick start Scotland’s Year of Young People in the Highlands.

Eden Court CREATIVE have invited local primaries from across the region to join them in the Northern Meeting Park for the first ever Highland Schools Hoolie on Thursday 25th January.

Pupils will take part in a colossal Strip the Willow before joining in a mass performance of the Stramash Flashmob: a specially choreographed flashmob just for Burns Day.

There will also be the Haggis Highland Games: a quick-fire relay of rabbie-related activities, and, of course, a selection of recited poetry.

The 16-strong team of In Your Area drama and dance specialists have been busy teaching the choreography to schools across the region in anticipation of the main event.

Over 600 pupils have been involved so far from Aldourie, Stratherick, Foyers, Central Smithton, Caol, Kinlochleven, Mallaig and Acharacle Primary Schools: many learning the moves to be filmed ahead of the Hoolie. This flashmob film will be premiered during the Hoolie itself in order to include those unable to journey as far as Inverness for the day.

The celebration continues into the weekend with the return of the popular Wee Burns Ceilidhs at 11am and 2pm on Saturday 27th January.

The hour-long sessions will be jam-packed with dancing, games and banter: ideal for those with children under the age of eight but big brothers and sisters are welcome too. Tickets are £4.50 each or £16.00 for a party of four.

The final shindig is for adult revellers only and boasts a contemporary twist on the traditional.

Aimed for 18+, the Big Burns Ravin’ Ceilidh will reward its ticket holders with a dram on arrival.

Attendees can expect good old-fashioned ceilidh dancing fused with drum and bass beats and electronic FX as the brilliant Monster Ceilidh Band provide the musical fodder in the OneTouch Theatre.

Nicola Gray, Eden Court CREATIVE’s Business & Engagement officer, said: “What better way to get the Year of Young People off to a flying start using dancing and technology combined to celebrate Rabbie Burns! We are still looking for schools to partake – to find out how to get involved, email me directly.”

The Monster Ceilidh band said: “We’re really excited to be playing a stomping ceilidh for the bard and celebrating his great works up in Inverness this Burns night. We’ll be performing traditional and contemporary tunes with a five-piece band with drums, bass, laptops and synthesisers alongside; octave mandolin, fiddle and the virtuosic accordion playing of Amy Thatcher.”

The Big Burns Stramash is funded by Event Scotland and part of their Winter Festivals programme.

MEDIA RELEASE issued by Eden Court. You too can share your stories (aka press or media releases), on this site. Email here for more information.