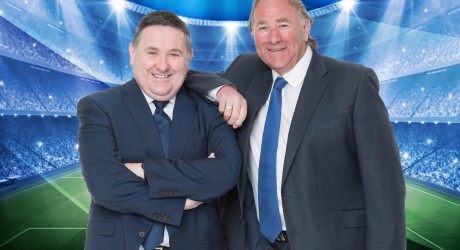 SCOTTISH football has a new signing – Peter & Roughie’s Friday Football Show – which premieres on STV this Friday, 26 January, at 8pm.

The half-hour show, which will air on STV every Friday of the football season, builds on the popularity of STV2’s Peter & Roughie’s Football Show – presented by top Scottish football pundit, Peter Martin (pictured, left) and legendary goalkeeper, Alan Rough, who has 53 caps to his name and went to three World Cups with the national squad.

In a week where the search for a new Scotland manager hit the headlines, the first programme features studio guest, former Scotland boss, Gordon Strachan, and an exclusive one-to-one interview with Celtic FC manager, Brendan Rogers, as well as news from all the Scottish Premiership clubs and the week’s goal action.

Peter and Roughie’s mix of knowlegable commentary and chat, expert insight and fun banter has already proved a big hit with football fans tuning in to their STV2 shows.

These continue to be screened on STV2 at 7.30pm from Mondays to Thursdays and on Saturdays, but football followers can also now tune in to STV for the brand new Friday night show.

Peter & Roughie’s Friday Football Show – which will be broadcast from a stunning new purpose-built studio – will see Peter and Roughie taking a look back over the previous week’s Scottish football – with footage of all the SPFL highlights and goals – and discussing the weekend’s forthcoming fixtures.

With VT packages of special reports and interviews, the new Friday evening shows on STV will feature a host of great guests including managers and players from the world of Scottish and international football, and regular appearances from Scottish coach and former player, Barry Ferguson.

STV head of Programmes, Paul Hughes, said: “Peter & Roughie’s Football Show is one of the most popular programmes on STV2. We know the duo is a favourite with viewers and we’re delighted we now have a slot for them on the main channel with all the week’s top goal action.

“Peter Martin is extremely well-respected in Scottish football, as, of course, is Alan Rough, whose experience and insight as a top player for Scotland is second to none. Together, they’re a fantastic double-act – the very strong following that their STV2 show has quickly built up has really demonstrated that – so I’m sure their ‘transfer’ to STV for our new Friday night show will be warmly welcomed by fans.

“It’s great for everyone that Scottish football is back on STV’s main channel with Peter & Roughie’s Friday Football Show.”

In April 2017, STV launched a new channel for Scotland, STV2. The channel broadcasts 24 hours-a-day, seven days a week on Freeview channel 8, Sky channel 117 and Virgin channel 159 and is streamed online and available for catch-up via the STV Player.

STV Productions is one of the UK’s leading content businesses, with ambitious plans for domestic and international growth. The company has a record of success across a range of genres including drama, factual and entertainment, producing a wide range of programmes for a variety of networks, including entertainment show Catchphrase for ITV, ratings success Antiques Road Trip for BBC One, Safeword for ITV2 and documentaries such as Ross Kemp Behind Bars : Inside Barlinnie for ITV, Dunblane: Our Story for BBCTwo and The Queen Mary: Greatest Ocean Liner, a documentary for BBC Scotland, BBC Four and Smithsonian Channel.