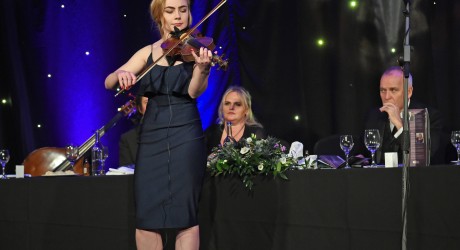 WEST Sound, the popular commercial radio station across Ayrshire and Dumfries, welcomed guests to the Double Tree by Hilton in Glasgow on Saturday night (20 January) to celebrate the birthday of Ayrshire’s icon and Scotland’s National poet, Robert Burns.

The event, now firmly marked in social calendars, was originally intended to be an one-off event, but, due to popular demand, it has returned every year, now clocking up an astonishing 33 years.

Chairing the evening’s proceedings for his fifth-year-in-a-row was Ayrshire man, Willie Young, the former football referee.

Highlights of the night included the station’s very own Cat Harvey with her hilarious ‘Toast to the Laddies’ and rebutting this was Sheriff Lindsay Wood with the ‘Toast to the Lassies’.

Robert Burns performer, Christopher Tait returned again to impersonate the Bard himself, delivering the all-important ‘Address to the Haggis’.

This year, the principal toast of the evening the ‘Immortal Memory of Robert Burns’ was recited by after-dinner speaker, John McKelvie, while Derek Pierce, from J&D Pierce Contracts, returned to give the ‘Selkirk Grace’.

Eryn was recently placed as one of the final four in the BBC Radio 2 Young Folk Awards, which took her to the Royal Albert Hall in London.

Songwriter Dougie MacLean, most famous for penning much-loved song ‘Caledonia’, took to the stage to perform a set. Guests were also treated to traditional Scottish music from John Carmichael and his Ceilidh Band.

Brenda Ritchie, West Sound station director, said: “The 33rd West Sound Burns Supper was an excellent tribute to Ayrshire’s best-loved icon, Robert Burns. It was an evening filled with passion, compassion and good cheer, with a mix of top class entertainment from all our talented performers and raconteurs.

“A special thanks must go to our sponsors for their support, and in particular J&D Pierce Contracts for being our principal sponsor on the night. And of course we must thank our guests and performers for making it an evening to remember.”

For those who missed out on attending this year, the West Sound Burns Supper is recorded and edited for broadcast on West Sound AM in Ayrshire and West Sound FM in Dumfries from 8pm to 10pm on Burns Day, Thursday 25th January, as well as airing highlights across Scotland on Bauer Radio’s Greatest Hits Network on the same day.