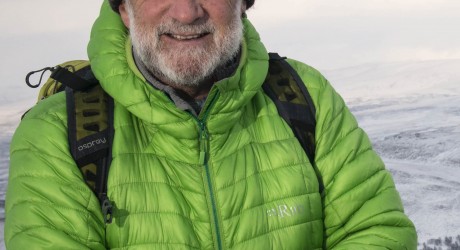 CAMERON McNeish, Scottish mountain walker, wilderness bikepacker and adviser to various organisations on outdoor pursuits, best known in his field as an author, broadcaster and magazine editor, has won the prestigious Scottish Award for Excellence in Mountain Culture in 2018.

Nominated by the public and his peers as a mountain hero who celebrates achievement, accomplishment and the spirit of adventure, Cameron McNeish joins the Fort William Mountain Festival Hall of Fame as the 2018 recipient of The Scottish Award for Excellence in Mountain Culture in the Festival prestigious award’s 11th anniversary year.

Cameron McNeish said: ‘I’m thrilled that there is now a national recognition of the direct link between our hills and wild places and the social history, folklore, traditional music and culture of Scotland.

‘And I’m delighted to be joining a very special group of people who have, in many different ways, contributed so much to all these aspects of our national heritage. I’m genuinely humbled.’

Through his highly-successful television programmes, numerous books and magazine articles Cameron McNeish has become one of the most recognisable figures in the British outdoors scene.

For 25 years, Cameron has been involved in making numerous television programmes for the BBC, ranging from mountaineering and rock climbing films to his own highly personal accounts of long backpacking trips through the highlands and islands, routes that include the Sutherland Trail, the Skye Trail and the Scottish National Trail.

A former chair of the Nevis Partnership, Cameron is an Honorary Fellow of the Royal Scottish Geographical Society and is patron of Mountain Aid and Scottish Orienteering.

A festival spokesperson said: “Cameron McNeish embodies the passion and the excitement that exploring the wild Scottish landscape entails, and the great desire to share this sense of adventurous wonder with others. Although Cameron has travelled extensively throughout the world and has led numerous treks to Nepal, India, Morocco, Turkey, Russia and Jordan, it is for his passion and enthusiasm for the mountains and wild land areas of Scotland that he is best known.”

The award is sponsored by leading Highland employer, Liberty British Aluminium, whose smelter is located at the foot of Ben Nevis just outside Fort William.

Brian King, managing director of Liberty British Aluminium at Fort William, said: “As an employer whose home is at the foot of Scotland’s tallest mountain and right at the heart of the Highlands, we are very proud to be associated with an award which promotes the rich and distinctive culture we enjoy here.

“Cameron has done a huge amount over the years to highlight our unique environment and way of life and we applaud him for his work that richly deserves this special honour.”

Richard Else, broadcaster and former winner of The Scottish Award for Excellence in Mountain Culture, said: “Cameron’s award is richly deserved. He’s been – and remains – a passionate campaigner for our all-important wild places and through his BBC television programmes has shared that love and concern with thousands of people.”

Cameron McNeish lives in the Scottish Highlands in the shadow of the Cairngorms with his wife, Gina.

The award will be presented to Cameron McNeish at a special ceremony during the Fort William Mountain Festival 2018 which runs in and around Fort William and Lochaber, the ‘Outdoor Capital of the UK’, from 21 to 25 February 2018. The 4th Scottish Youth Ambassador for Mountain Culture will also receive their award at the same time. http://www.mountainfestival.co.uk/award.html

To download a hi-res image of Camerson McNeish go to: https://www.dropbox.com/sh/wbr1ucwzq2zj1kn/AAC70Co948mH2hovPOLQBUcSa?dl=0

If you are keen to attend the Fort William Mountain Festival for a commissioned travel feature or adventure / activity feature please contact Paddy Cuthbert to discuss a funded press trip to the ‘Outdoor Capital of the UK’.

The Fort William Mountain Festival 2018 is presented in association with The Heritage Lottery Fund, Nevis Landscape Partnership, the ‘Outdoor Capital of the UK’, and the Highland Council and runs in and around Fort William in Lochaber, the ‘Outdoor Capital of the UK’, from Wednesday 21 to Sunday 25 February 2018. https://www.mountainfestival.co.uk/

The award was set up in 2008 by the Highland Mountain Culture Association Ltd, organisers of the Fort William Mountain Festival. The 2018 Award is sponsored by Liberty British Aluminium. The Youth Award is sponsored jointly by Corpach Boatbuilding Company Limited and the Nevis Landscape Partnership / Heritage Lottery Fund.

Previous Recipients of The Scottish Award for Excellence in Mountain Culture are:

Previous Recipients of The Scottish Youth Ambassador Award for Excellence in Mountain Culture are:

Festival organisers – The Highland Mountain Culture Association Limited - is a not-for-profit organisation, whose aim is to promote the understanding and appreciation of the world’s mountain places and people, by creating opportunities for people of all ages to share their mountain experiences, ideas and visions. To showcase these ideals, it stages annually a programme of events within the Lochaber area, called The Fort William Mountain Festival.

The Outdoor Capital of the UK is Lochaber Chamber of Commerce’s tourism brand, promoting adventure for all! The Chamber publicises, sponsors and promotes Fort William and Lochaber as the best place in the UK for everyone to experience the outdoors; with a view to developing local jobs and wealth and encouraging sustainable economic growth.

This is done through a range of collaborative marketing initiatives and activities. The organisation currently has a wide range of member businesses ranging from accommodation, food and drink and activity providers to non-tourism focused businesses who support the aims of the Lochaber Chamber of Commerce and acknowledge that tourism is crucial to the local economy. Many of these businesses are SMEs and by pulling resources and working as a team the Lochaber Chamber of Commerce achieves the positive results that individually the members couldn’t otherwise reach.

The Chamber produces official event programmes and guides which showcase all there is to see and do in Fort William and Lochaber. The Outdoor Capital of the UK website is also the go to site for local events, outdoor activities and visitor accommodation in the area. www.outdoorcapital.co.uk www.lochaberchamber.co.uk.