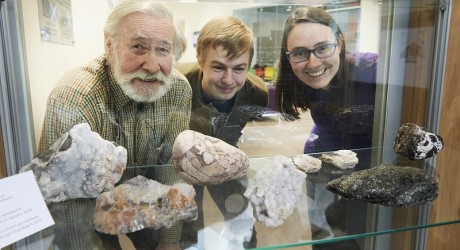 AN amateur geologist is helping students to gain a rock solid education with a donation of geological samples.

Calum Anton, from Fortrose, has given over 50 rock specimens to the University of the Highlands and Islands.

The collection includes rare samples from around the Highlands and Islands, the rest of Scotland and Europe. Highlights include ammonite fossils, Pahoehoe lava from the Azores and fossils of an extinct type of oyster called Gryphaea, commonly known as Devils Toenails, due to their curved and bumpy appearance.

The samples are on display at the University of the Highlands and Islands STEM Hub in the An Lòchran building on Inverness Campus. They will be used to teach school pupils about the composition of the earth and will also be accessed by students from the university’s geography degree.

Sam Clark, the university’s STEM development manager, explained: “Calum’s fantastic donation will allow local school pupils the opportunity to get up close and personal with geological samples from around the world. The best thing about this collection is Calum is happy for the school pupils and university students to get hands on and pick up the samples for a closer look. The samples will allow us to teach the geological history of Scotland and hopefully will inspire some to get out and see what rocks they can find in the Sottish landscape.”

Speaking about his donation, Calum said: “From an early age, the outdoors and wildlife were always a major interest nurtured by parents and school in our various rural homes within Highland, Aberdeen and Perthshire to Moray. My interest in geology was first sparked while working in Strathyre Forest and finding crystals in a lump of white quartz lying in a drainage ditch.

“I was about 17 at the time, in my last year at school and, never having done a day’s study of physics or chemistry, meant that geology was going to be ‘another interest’ in the future. That was in the mid-50s and has resulted in a fair amount of rock being amassed. From that, I hope this small but broad selection of rocks and minerals, largely from Scotland, will stimulate an early interest and direction in schools and students in the Highlands. That gives me great satisfaction.”

Keiran Young (22), a fourth year BSc (Hons) geography student from Inshes, attended the unveiling of the donation. He said: “Although you can learn all about the geology of the planet in a book or in class, nothing quite beats seeing the samples first hand. Thanks to this donation people will have the opportunity to learn more about what forms the local landscape as well as giving the ability to visually compare it with samples from across the globe. Such an experience could be enough to ignite a passion for a variety of subjects and potentially pave the way for future generations of budding geologists and geographers alike.”

To find out more about geography courses at the University of the Highlands and Islands, visit www.uhi.ac.uk

University of the Highlands and Islands · Geology · Inverness and North (postcodes IV, HS, KW and ZE)