Media release: The Arran Banner is a big success 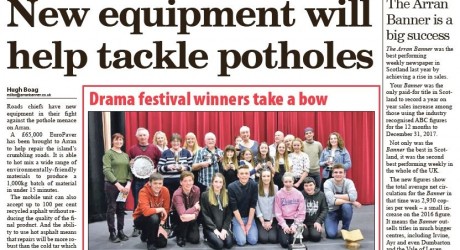 THE Arran Banner was the best-performing weekly newspaper in Scotland last year, by achieving a rise in sales.

The Banner was the only paid-for title in Scotland, to record a year-on-year sales increase among those using the industry recognised ABC figures for the 12 months to December 31, 2017.

Not only was the Banner the best in Scotland, it was the second-best performing weekly in the whole of the UK.

The new figures show the total average net circulation for the Banner in that time was 2,930 copies per week – a small increase on the 2016 figure.

The Banner, which is based in Brodick, has been serving the people of the Isle of Arran since 1974. News editor, Hugh Boag, said: ‘I am delighted we have been able to achieve this remarkable success. It shows the hard work and dedication which is put in by the small team at the Banner.

‘I can only thank our readers for staying so loyal week in, week out and welcome our new growing family of online readers, who have helped us increase our circulation in these challenging times.’

The Arran Banner is part of the Wyvex Media group whose sister titles include The Oban Times, The Campbeltown Courier and The Argyllshire Advertiser.

MEDIA RELEASE issued by The Arran Banner. You too can share your stories (aka press or media releases), on this site. Email here for more information.