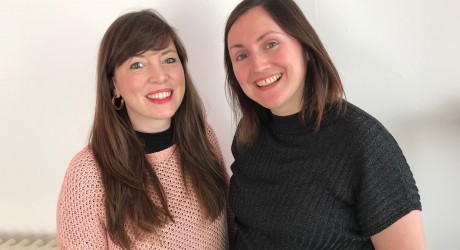 FOCUS is a pilot project, funded by the National Lottery through Creative Scotland, Scottish Enterprise, and the participating companies, that provides expert, sector-specific business support to screen production companies working in Scotland. Following the launch of the initiative in July 2017, the project has operated a rolling application process, which is now set to close on 29th March.

The project aims to support up to 20 screen companies during its two-year pilot. Eight companies have already been selected to participate in FOCUS: barry crerar (pictured), Black Camel Pictures, Bees Nees, Hopscotch Films, La Belle Allée Productions, Matchlight, Seventh Crow and Urbancroft Films. Each company was allocated a FOCUS Business Development expert to create a business development strategy for their company, before moving on to Stage two where they will access business support as needed across a range of key areas including development, finance and distribution.

Rebecca Thompson, business development manager, FOCUS, said: “This is an opportunity for companies to access the level of expert, sector specific, business support that could transform their company. We are now actively seeking applications from ambitious companies who are committed to growth, and in a position to benefit from the opportunity.”

Scott Donaldson, acting director, Screen at Creative Scotland, said: “FOCUS is proving to be an extremely important initiative, providing specialist business support to Film and TV companies in Scotland to encourage further growth and ambition. FOCUS has already supported a fantastic variety of companies across genres and we would encourage applications from companies across Scotland who are looking for specialist advice and guidance on expansion.”

Emily Paterson, FOCUS project manager at Scottish Enterprise, commented: “The FOCUS project was created in response to industry demand and is an innovative approach to helping Scottish screen production companies expand strategically to take advantage of market opportunities, both internationally and with existing clients, by connecting them to sources of expert advice and support. For anyone thinking about applying, I’d encourage them to visit the website and find out more about how this pioneering support from FOCUS could benefit their company to grow and reach new markets.”

Rosie Crerar, from participating FOCUS company, barry crerar, commented: “The support of FOCUS has enabled us to interrogate our business at a crucial stage of our company’s development, as we transition into our first feature whilst continue to build our development slate. FOCUS has helped us review how we operate and identify key areas of vital support as we bridge these next steps.

Applications are now open for Scottish companies producing film, TV or animation, for broadcast or distribution, to take part in FOCUS. Interested companies should visit www.filmcityfutures.com

FOCUS is a pilot initiative by Film City Futures, in partnership with Scottish Documentary Institute, and funded by Creative Scotland and Scottish Enterprise and participating companies. Screen business are not always able to access the business development expertise that they need in order to achieve significant growth. FOCUS seeks to change this, by providing screen sector companies with access to the sector-specific business development expertise that they need from experts in production, law, HR, book scouting, sales and distribution, and other areas.

Applications are assessed by the FOCUS team according to the project’s eligibility and selection criteria, and 20 companies will be supported over the course of the pilot.  For more information, criteria, guidelines and application form interested companies should visit www.filmcityfutures.com

About the selected Film and TV production companies

barry crerar is a film production company founded in October 2016 by producing duo Ciara Barry and Rosie Crerar. With the support of a BFI Vision Award, barry crerar have been developing a slate of contemporary and culturally relevant stories, with a focus on emerging and under-represented voices. Filmmakers include Esther May Campbell (Light Years), Paul Wright (For Those In Peril), Scott Graham (Iona, Shell), and first feature filmmakers, Ruth Paxton and Adura Onashile. In 2017, barry crerar produced two films with artist filmmaker Rachel Maclean, Spite Your Face, representing Scotland at the Venice Biennale 2017, and R U Satisfied?, in post-production, TX C4 2018.  They are currently in pre-production with Born to Run (working title) the third feature from writer/director Scott Graham, in co-production with Margaret Matheson’s bard entertainments, and, as co-producers, in post-production on Irene’s Ghost director Ian Cunningham, produced by Rebecca Mark Lawson. www.barrycrerar.com

Bees Nees is home to a highly-experienced production team, equally accustomed to producing authored documentaries right through to live entertainment shows. Their track record is exemplary; since 2007 they have been responsible for more than 200 hours of tv programming and hundreds of hours of radio. Recent highlights include: four series of award-winning international co-production, Port – the part music, part travelogue documentary series with Julie Fowlis; the return of their popular blue-light series Scotstar, commissioned by BBC ALBA and sold internationally, and Hamish, the critically acclaimed feature documentary on the life and times of poet, folklorist and cultural giant Hamish Henderson. Long running music strands on radio, hosted by the legendary broadcaster Iain Anderson and young troubadour Roddy Hart, have built loyal audiences, both at home and around the world.

Black Camel Pictures, creator of the successful Outpost trilogy of films, is a production company founded in Glasgow by Arabella Page Croft and Kieran Parker. Their feature film Legacy was selected for numerous festivals and was awarded The Grand Jury Prize at the 14th Annual American Black Film Festival in Miami. Black Camel also produced the successful feature films Sunshine on Leith and The Rezort. www.blackcamel.co.uk (under construction)

Hopscotch Films is a film and television production company based in Glasgow. Hopscotch have just produced Paul Wright’s new film Arcadia, which the BFI released in the summer. Hopscotch’s second comedy drama, Long Night at Blackstone, directed by Greg Hemphill, is about to transmit on BBC Scotland. Rachel Maclean’s new film Make-Me-Up, is in post production, also for summer release. Four other feature documentaries are editing, including a follow up to The Story of Film from writer director Mark Cousins, and a documentary to mark Nelson Mandela’s centenary.  Last year’s Storyville documentary Accidental Anarchist is now on BBC World. www.hopscotchfilms.co.uk

La Belle Allée Productions Limited is one of Scotland’s leading film and television production companies, making high quality feature film, documentary and television drama for the domestic and international markets. Established in 2001, La Belle Allee is managed by Karen Smyth who’s feature films include Tinseltown, One Life Stand – winner of five new talent Baftas and a BIFA, and Valhalla Rising by Danish enfant terrible and Drive director Nicolas Winding Refn. Shot entirely in Scotland, Valhalla Rising was named by Total Film as the “most significant co-production in recent history”. Their most recent feature film is Seat In Shadow, released by Pecadillo in the UK last year. La Belle Allée produces a diverse mixture of entertaining television content, from wedding-fashion focused Dress of Your Dreams to cherished children’s comedy If You Can’t Stand the Heat. www.labelleallee.com

Matchlight specialises in observational documentary, history, arts, current affairs and popular factual television. The company was established in 2009 and has since made over 100 hours of factual television for BBC One, ITV, BBC Two, BBC Alba, BBC Three, BBC Four, BBC Scotland, Channel 4 and Channel 5. In 2010, Matchlight’s At Home with the Georgians was nominated in the History category in the Royal Television Society’s Programme Awards. In 2012, Matchlight won a Scottish BAFTA award for Afghanistan: The Great Game – A Personal View by Rory Stewart (Best Factual Series). Matchlight’s Ted Hughes: Stronger Than Death, directed by Richard Curson Smith, won the Best Arts Documentary at the 2016 Celtic Media Festival, the film was also nominated for a Grierson Award in 2016 and a British Academy Scotland (BAFTA) in the same year. Transplant Tales, produced by Matchlight in 2015, was nominated in the Factual Series category at the British Academy Scotland (BAFTA) Awards 2015 and the RTS Scotland Awards 2016. My Baby, Psychosis and Me co-produced by Matchlight and Sprout and directed by Rebecca Burrell won the Documentary prize at the Mind Media Awards 2016. Matchlight received two honours at the RTS Scotland Awards 2017, with Scotland and the Klan winning the award for Documentary and Specialist Factual: History and My Baby, Psychosis and Me winning the award for Documentary and Specialist Factual. www.matchlight.co.uk

Seventh Crow is a creative production company with a focus on short form drama. The company also runs a co-working space and provides production services for creative agencies and brands worldwide – in particular across Germany, Spain and Poland. The company was established by Bianca Herold, and has received 5 BAFTA Scotland New Talent Awards & Nominations as well as a number of festival awards, including a BAFTA New Talent Award for short film Last Night In Edinburgh, and nominations for the films The Still Heart Beating, Judas Goat, and Sunsets & Silhouettes. www.seventhcrow.co.uk

About the Business Advisors

Mike Kelly is a chartered accountant and NESTA creative business mentor. Kelly was part of the management team that transformed Thames Television into a successful content producer and distributor, and has advised clients such as Aardman Animations, Octopus Investments, and Film London.

Olsberg•SPI is a leading strategy consultancy for the creative industries, and has worked on company development and sustainability in the screen sector in the UK and around the world. In 2012, the firm published Building sustainable film businesses: the challenges for industry and government. Leon Forde will be the lead consultant for FOCUS, with input from Jonathan Olsberg, Andrew Barnes and Aidan O’Hare.

Jen Topping is an independent consultant specialising in strategy and management of digital content propositions for traditional media businesses. She spent seven years at Channel 4 in a range of senior roles including managing channel4.com and was part of the launch team for 4oD. Topping was also EVP of Digital for Beano Studios, and worked at director level for the studio creating interactive TV experiences for Xbox.

Film City Glasgow has firmly established itself as the heart and soul of Scotland’s film and television industry. The facility comprises of over 12,000 sq. ft. of production office space, a 5,000 sq. ft. studio/build space, workshop areas, rehearsal/meeting rooms, café, and 10,000 sq. ft. of creative business offices, now home to over 25 permanent tenants from the screen and wider creative industries.  Film City Futures is a charitable subsidiary of Film City Glasgow. Its mission is to connect people, space and opportunity, enabling access and entry to the screen industries for all – acting as a catalyst for participation, learning, and innovation. A year-round programme of activities allows Film City Futures to offer a range of opportunities whilst identifying uniquely talented individuals. www.filmcityglasgow.com

Scottish Documentary Institute has produced over a hundred films, screening in sixty countries worldwide, garnering international recognition as being at the cutting edge of the documentary sector. Bridging art and industry, SDI is committed to supporting authored films driven by content and emotional experience.  SDI comprises two entities, SDI Outreach and SDI Productions. SDI Outreach is a non-profit organisation, delivering a ladder of development opportunities to benefit all Scottish filmmakers and producers, in addition to running Scottish delegations, in collaboration with Creative Scotland.  www.scottishdocinstitute.com

Scottish Enterprise is Scotland’s main economic development agency and aims to deliver a significant, lasting effect on the Scottish economy. Our role is to help identify and exploit the best opportunities for economic growth. We support ambitious Scottish companies to compete within the global marketplace and help build Scotland’s globally competitive sectors. We also work with a range of partners in the public and private sectors to attract new investment to Scotland and to help create a world-class business environment. www.scottish-enterprise.com

MEDIA RELEASE issued by Film City Futures. You too can share your stories (aka press or media releases), on this site. Email here for more information.