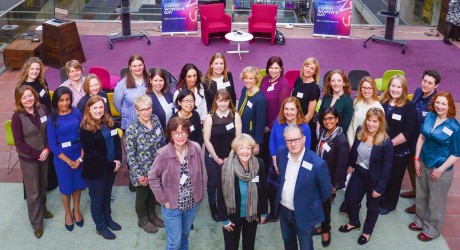 EXPERTS from across Scotland gathered in Glasgow today (Tuesday, 13 March) to participate in the BBC’s prestigious Expert Women programme.

Expert Women Scotland saw 24 women of all ages specialising in a broad range of areas; from fishing to farming, Brexit to business and medicine to manufacturing, gather at BBC Scotland’s HQ in Glasgow. The women received practical advice and coaching in what broadcasters are looking for in an interviewee as part of the BBC Academy’s Expert Women’s programme.

The 24 experts were selected from around 400 women who were looking to gain practical experiences in front of a camera, and in the radio studio. Expert Women Scotland offers tailored masterclasses with industry professionals, including experienced programme makers, and an opportunity to network with broadcasting professionals.

This is the latest in a series of free media familiarisation days held in London, Salford, Glasgow, Cardiff and Belfast during the last five years. More than 100 women have taken part to date with several new media careers being launched along the way.

At the start of the media familiarisation day, there were keynote speeches from Professor Lis Howell, director of broadcasting at London’s City University, and Gary Smith, head of news and current affairs at BBC Scotland.

Gary Smith said: “We are delighted to be hosting Expert Women Scotland at BBC Scotland in Glasgow. With the proposed launch of BBC Scotland’s new digital channel, it’s an exciting time for us and we are looking for new voices to add their expertise to the national news agenda.

“The range and depth of knowledge from applicants was incredible. We have experts attending Expert Women Scotland who are based all over the country from Orkney to the Borders. I have no doubt you will be seeing many of them on your screens or on air soon.”

Professor Howell’s Expert Women on News campaign provided the impetus for the BBC to initiate BBC Expert Women in 2013.

She launched the campaign in 2012 after research revealed that on the UK’s main broadcast news programmes, women contributing to items on politics were outnumbered ten to one by men; for sport, it was six to one; home affairs, five to one; entertainment, four to one; and even health, by two to one.

Professor Howell said: “The situation is slowly changing but women interviewees are still outnumbered by men by three to one across flagship news programmes.

“I am really pleased to be in Scotland talking to this group of amazing experts as part of BBC Academy’s Expert Women programme. This initiative has led to more women appearing on our screens, and it’s an ongoing process. There is a real art to communicating your expertise on air. To receive first-hand advice like this from broadcasting professionals at the top of their game is an opportunity to be grabbed with both hands.

“This is a controversial and brave initiative. But no-one can deny that it gets more expert women on air and that has to be good.”

Expert Women Scotland is organised by the BBC’s in-house training department, BBC Academy, in conjunction with STV and supported by Women in Journalism Scotland.

Once they have taken part in the Expert Women Scotland event, participants will be included on a database available to BBC and STV news outlets.