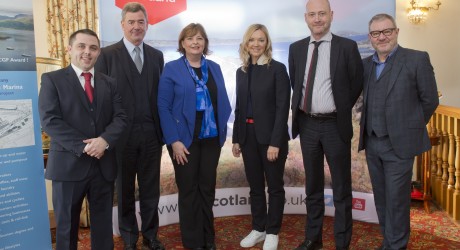 The event was brought to the Highlands and Islands for the first time and was held at The Moorings Hotel, set on the iconic Neptune’s Staircase at the western entrance to the Caledonian Canal.

Organised by Sail Scotland, the national sailing tourism marketing organisation, it was supported by Highlands and Islands Enterprise (HIE) and Caledonian MacBrayne.

The conference provided a unique opportunity to bring the sector together to encourage new ideas, partnerships and increased collaboration.

A formal twinning agreement between Sail Scotland and The Swedish Guest Harbour’s Association was announced at the conference.

Director of the Swedish Guest Harbours Association, Fredrik Barthold, joined ten members of the association and gave an international perspective of developing a destination approach to marine tourism in rural Sweden.

Fiona Hyslop MSP, Cabinet Secretary for Culture, Tourism and External Affairs, said: “With extensive coast lines and beautiful scenery, it is little surprise that tourism is one of Scotland’s key industries and biggest success stories – and marine tourism is fast becoming one of the driving forces behind that success.

“With the right infrastructure in place, community engagement and work of the public and private sector, future growth of marine tourism is sure to continue – and as this conference has demonstrated, there is no shortage of ideas about how we continue to move the sector forward.”

Sail Scotland’s chief executive officer, Daniel Steel, said: “Sailing tourism supports 2,700 jobs and has an economic value of £130 million, a growth of 28 per cent between 2010 and 2016. With identified potential to grow this to £167 million over the next few years, it is no surprise that there is huge interest in the sector.

“We have developed and grown Scotland’s Marine Tourism Conference, now in its third year, to directly support of the National Marine Tourism Strategy. With over 100 delegates from across Scotland, and a delegation from Sweden, it has grown into a key annual event which inspires and challenges delegates to collaborate, innovate, and ensure that we work together to make the most of the opportunities ahead as we plan for Scotland’s Year of Coast and Water 2020.”

Professor Lorne Crerar, chair of HIE, also spoke at the event. He added: “We are delighted to hold the conference in the Highlands and Islands. The region offers tourists a diverse mix of marine tourism experiences and is home to some of the most interesting and challenging sailing waters in Scotland and is already gaining recognition internationally as a world class sailing and marine tourism destination.

“Many remote and rural communities are developing first class marina facilities which are proving to be increasingly attractive to the global sailing community. As more visitors come, more jobs are being created, new businesses are emerging in this vibrant and growing part of the tourism sector in Scotland.”

Marc Crothall, chief executive of Scottish Tourism Alliance, said: “The conference is one of many tourism conferences taking place the length and breadth of Scotland as part of the very first Scottish Tourism Month and I was delighted to hear that the event was a sell-out, a reflection of the widely recognised opportunity to grow tourism in this hugely important sector.

MEDIA RELEASE issued by Sail Scotland. You too can share your stories (aka press or media releases), on this site. Email here for more information.