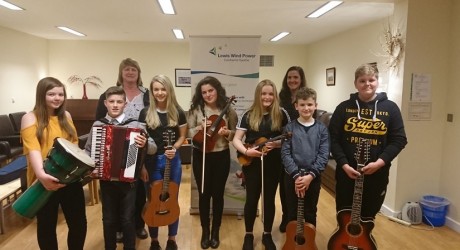 A CELEBRATION of the talented young musicians in the Outer Hebrides will be held in a showcase feature during the islands’ flagship festival this summer.

The internationally-renowned Hebridean Celtic Festival will mark the Year of Young People 2018 by bringing together 20 musicians aged between 12 and 16 from Barra, North and South Uist and Lewis and Harris to perform a suite of traditional music and Gaelic songs.

The piece will feature a new, specially-commissioned Gaelic song by singer-songwriter, Eilidh Mackenzie, from Lewis, which will get its public debut on the main festival stage.

Eilidh, who comes from a family of Gaelic singers, is a former Mod Gold Medal winner. She has been tutoring Gaelic song for 25 years and in 2005 devised, co-wrote and produced what is acknowledged to be the first-ever Gaelic musical, Taigh Màiri Anndra, celebrating the life and work of American folklorist, Margaret Fay Shaw.

The project has been organised by HebCelt and Fèisean nan Gàidheal, the umbrella association of the Fèis (Gaelic arts tuition festival) movement. It is supported by Comhairle nan Eilean Siar (Western Isles Council), Lewis Wind Power, which also sponsors the festival’s Islands Stage, and Highlands and Islands Enterprise (HIE).

Building on the relationships grown with Fèisean nan Gàidheal, local fèisean in the Outer Hebrides and other youth arts groups, the project will draw from their rich resources to assemble the group of young musicians.

The suite of music will be made up of about ten minutes from each of the groups performing material from their own area, followed by an ensemble piece which will include the newly-commissioned song.

HebCelt director, Caroline Maclennan, said: “The islands are blessed with so many skilled musicians and this project in the Year of Young People will showcase that wonderful talent.

“The festival is always eager to encourage and promote young artists and we are excited to be able to present this project on the main stage, which places the performance amongst our headline shows.”

Anna Murray is involved with the project as a tutor for Fèis Eilean an Fhraoich and as a traditional Gaelic music tutor for Comhairle nan Eilean Siar.

She said: “This project, which literally puts our young people centre stage, highlights the important work of the fèis movement and Comhairle nan Eilean Siar’s commitment to showcasing young people from across the islands and will be a wonderful addition to this year’s HebCelt”

Kerry Macphee, community liaison for Lewis Wind Power, said: “Lewis Wind Power is delighted to be able to help finance this fantastic piece of island culture which will highlight the amazing musical talent that is still so abundant across the Western Isles.

“We became aware of the project through conversations on our continued sponsorship of the Islands Stage at the festival, and we knew straight away that it was something we wanted to support.

“It’s a fantastic way of bringing young and talented people from across the islands together and we are looking forward to what should be a memorable performance.”

Bill McMillan, head of Business Growth at HIE, said: “Creative industries is a key sector for us and music is a huge part of that. The Western Isles has a wealth of local musical talent and is a location of choice for many people working in music and other forms of creative industries.

“We are delighted to be supporting this excellent showcasing opportunity for young talent, especially during the Year of Young People, and look forward to seeing the shows take shape.”

The 2018 HebCelt, which will run from 18-21 July, will be headlined by Deacon Blue, The Fratellis, Eddi Reader, Skippinish and Roddy Woomble.

Stay connected with all the festival’s news:

The Hebridean Celtic Festival is a not-for-profit charitable event firmly rooted within its community and is almost entirely managed and produced by voluntary effort.

The festival has grown from a small event attracting less than 1,000 fans, to an international showpiece for roots, Celtic and traditional music. It is estimated it has generated more than £20 million for the local economy over two decades.

Last month, it was crowned Best Cultural Event or Festival at the Scottish Thistle Awards. In January, it won a Highly Commended accolade at A Greener Festival Awards and in 2017 scooped the Festival of the Year award and the Grand Prix prize at the Scottish Event Awards.

It was also named 2017 Best Cultural Event or Festival in the Highlands and Islands Tourism Awards for the second time in three years.

An independent assessment of the 2016 HebCelt showed it generated more than £2.2 million for the islands’ economy and helped safeguard 40 tourism-related jobs.

The Scottish Government’s themed year for 2018 is the Year of Young People, following the Year of History, Heritage and Archaeology 2017.

A global first, YoYP 2018 is a platform for young people, aged 8-26, to have their voices heard on social issues and their talents celebrated.

A year-long programme of events and festivals is taking place across the country for all ages to enjoy, led by EventScotland, part of VisitScotland’s Events Directorate.

Local authorities, schools, youth groups and organisations are running their own YoYP 2018 activity. Search #YOYP2018 on Twitter for the latest news.