Media release: Top musicians from both sides of the North Sea to perform together 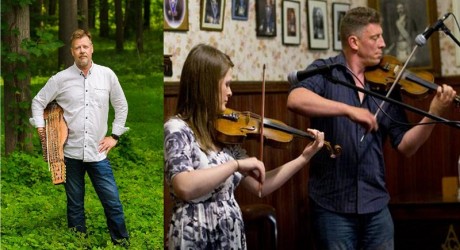 AUDIENCES in Aberdeenshire will get to experience top musicians collaborating across the North Sea next week.

‘Fiddler of the Realm’, Peter Puma Hedlund - considered Sweden’s leading traditional player of the modern chromatic nyckelharpa – is coming to work with Paul Anderson – one of Scotland’s finest fiddlers and Shona Donaldson – a previous winner of Scots Singer of the Year and first female Bothy Ballad Champion of Champions.

People will get the opportunity to hear and see the results of the collaboration on Friday 27 April, 7.30pm, MacRobert Hall, The Square, Tarland AB34 4YL

Peter, Paul and Shona will also be performing and tutoring at Northern Streams 2018 – an unique festival of Nordic and Scottish music, song and dance based in Edinburgh, celebrating its 15thanniversary. Also on the bill will be Fika Collective – a Glasgow-based band playing Nordic and Scottish music and V-Dala Spelmanslag – Sweden’s longest-running student folk ensemble & three times student world champions! See www.northernstreams.org for details.

Festival organiser, Fiona Campbell, said: “We are pleased to be working with Paul and Shona to help bring Peter Puma Hedlund over to collaborate with them and for their local audience to have the opportunity to experience the results as well as those at the festival in Edinburgh”.

Northern Streams is organised by the Traditional Music and Song Association (TMSA) Edinburgh & Lothians Branch. The branch acknowledges the specific support of the concert in Tarland from The MacRobert Trust as well as funding from the Hope Scott Trust, and donations from individuals and other sources.

Information about the artists – short biographies

Peter Puma Hedlund is considered Sweden’s leading traditional player of the modern chromatic nyckelharpa, having won the title World Champion twice, in 1992 and 2000. He earned the designation, ‘Riksspelman’ – Fiddler of the Realm – while still in his teens (1975) through receiving the Zorn Silver Medal. In 2010 he received the Zorn Gold Medal – recognised as the highest honour Sweden can bestow on an artist – awarded by Svenska Folkdansringen, the Swedish national organisation for traditional music, dance and handicraft.

Peter is proud of the strong musical tradition and heritage that nurtured him as he grew up in Uppland, learning directly from the old masters – especially Peter’s primary inspiration and teacher – the legendary Eric Sahlström. He is a greatly sought after teacher on a global scale and has influenced all of the younger generation of nyckelharpa players. He was chosen as the Patron of The World Fiddle Day 2017 and lives with his wife Karin and their two sons, Jonas and Mathias, in Iste, Hälsingland (about a four-hour drive north of Stockholm).

Shona Donaldson is originally from Huntly but now living near Tarland in Aberdeenshire with husband, Paul Anderson. She is one of Scotland’s leading traditional singers. In 2009 she was voted ‘Scots Singer of the Year’ at the BBC Alba Trad Music Awards and in 2016 she became the first woman ever to win the coveted ‘Bothy Ballad Champion of Champions’. She was also a finalist in the BBC Radio Scotland Young Traditional Musician of the Year and took part in the TMSA Young Trad Tour of winners and finalists from the competition in 2004.

Shona has sung on a number of recordings including an album of the works of Robert Burns in Scots and Gaelic and her solo album, ‘Short Nichts and Lang Kisses’. She performs regularly at home and abroad and guests and has been a guest at festivals like Celtic Connections, Keith Folk Festival (TMSA), Orkney Folk Festival, Cullerlie Traditional Singing Weekend, Willie Clancy Week (County Clare, Ireland) and the Rudolstadt International Folk Festival.

Paul Anderson is one of the finest Scots fiddlers of his generation. During his competitive career, Paul won most of the traditional fiddle championships in Scotland and in 1995 won Scotland’s premier fiddling event, the Glenfiddich Scottish fiddle championship, which was until recently, held each year at Blair Castle.

Paul was brought up on the family dairy farm at Tarland near the Cairngorm National Park in the heart of rural Aberdeenshire, where at the age of five he discovered an old fiddle under his grandparent’s spare bed, an old French violin which he plays to this day. He began initially with classical tuition but before long joined the acclaimed Scots fiddle group, The Banchory Strathspey and Reel Society. He went on to study for several years with Douglas Lawrence of Buckie, who was the most acclaimed pupil of Hector MacAndrew, a player who could trace his fiddling lineage directly back to Niel Gow and the Golden Age of Scottish Fiddle music.

Gow is regarded as the father of Scottish fiddle music and was a legend in his own lifetime. Hector’s grandfather was taught by James Mackintosh of Dunkeld who was the last pupil of Niel Gow. Therefore Paul is part of a teaching lineage which stretches right back to before 1745 and the time of Gow. Consequently, Paul is a highly-regarded tutor and as well as solo tuition has led workshops and master classes from Aberdeen to Australia and from Banff to British Columbia.

Paul has toured extensively and recorded eight solo albums and over forty albums with artists like Pallas, Rock Salt and Nails, The Cutting Edge and the Banchory Strathspey and Reel Society. Paul regularly recites the poetry of Robert Burns and in 1993 he played the part of the young James Scott Skinner in the play ‘The Strathspey King’. In 2008, Paul performed at a private reception for Prince Charles at Fyvie Castle to celebrate Prince Charles’ 60th birthday and in June 2010 he performed at an 80th birthday party in Edinburgh Castle for Sir Sean Connery at the request of the Scottish Government.

A regular on Scottish TV and radio, in 2011 he presented a series of features on traditional Scottish music and song for the BBC Scotland programme, ‘Landward’. He recently was seen in the film remake of Whisky Galore – wielding his fiddle at a ceilidh! He also is a composer of some repute, having composed over 300 pieces in the Scots style and published some in the Lochnagar Collection as well as has collated other collections of previously unpublished and out of print fiddle repertoire from the north-east of Scotland, with partners such as the Highland Music Trust, Taigh-na-Teud,  the Elphinstone Institute and Greentrax recordings.

He has also written articles and given talks and lectures on the subject.  http://www.paulandersonscottishfiddler.com