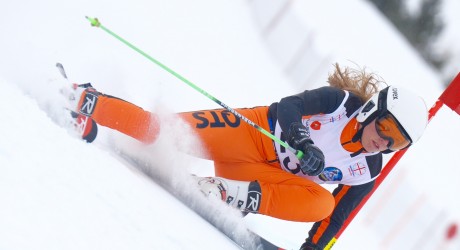 IN what could only be described as ‘challenging conditions’, Zak Vinter and Nicole Ritchie posted the fastest times of the day to win the Scottish FIS Giant Slalom titles at the Nevis Range.

A week ago, conditions were looking ‘immense’, but a period of warm weather saw the depth of snow shrink.

However, this did not deter the small but enthusiastic group of racers from making the trip to the Nevis Range for the Giant Slalom double header, followed by two slaloms.

It was always going to be a tough ask to encourage more racers to attend the races at the end of a tough season and those who made the trip endured tough visibility on the first run with better conditions on the second run.

Ritchie was fastest on both runs to win by just over a second from Still with Clark ahead of Hannah Gray.

Vinter put in a solid first run to have a half-second lead over Innes after the first run after Innes had almost crashed coming off the steep section, managing to keep his turns going despite having to rely on his strength as he was heavily on his inside ski!

Middleton was a third of a second further back, with Charles Rankin leading the rest of the field having made good use of bib number one.

Run two for the men saw Rory Farren put in a solid run to climb to fourth overall with David Christey go fifth. Thomas Cherry jumped up to sixth as Rankin headed the opposite direction, eventually finishing seventh but still taking the fastest Under 18 place. Middleton and Innes swapped places on the podium as Vinter clung on for the win.

The end of season Scottish FIS races are back on the calendar. Make a point of entering if you are a FIS racer next year!

The fog may have played its hand on the first run but ski racing is an outdoors sport!

Some were even overheard to say, “What a great day of racing!”

More action shots are on www.racerready.zenfolio.com