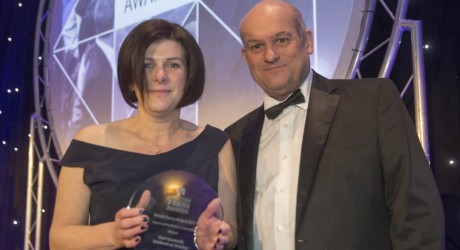 DANI Garavelli has been announced as the winner of the inaugural Nicola Barry Award at this year’s Scottish Press Awards ceremony, in Glasgow last night (Thursday 26 April).

This new peer-led prize aims to encourage the kind of elegant prose and campaigning reportage for which the late Nicola Barry, an award-winning columnist and feature writer, was renowned.

The award has been established by Women in Journalism Scotland, a new organisation representing women in the media in collaboration with the Scottish Newspaper Society.

The award was presented to Ms Garavelli, a freelance journalist who writes a regular column for Scotland on Sunday, by Nicola Barry’s husband, Alastair Murray. Nicola Barry died in January 2017 at the age of 66.

Presenting the award, Murray, who is also a journalist, said: “It would be easy to ask for an award for every journalist who dies, but there are so few of us who could legitimately be described as exceptional, brilliant even. And those words apply to Nicola Barry.

“She was an ardent feminist long before it was fashionable and an advocate of women’s rights. She spoke out against injustice in the workplace and in the wider world through her columns.

“I see many of the same traits in the writing of Dani Garavelli, who in her writing, combines insight and passion with equal fluency.”

Women in Journalism Scotland co-chair, Libby Brooks, said: “Nicola Barry was a much-admired columnist, and in Dani Garavelli we found a writer whose depth of analysis, range of subject matter and quality of prose likewise set her apart.

“It’s acknowledged that Garavelli is one of the finest columnists writing for the Scottish press today of either gender. Never polemical for the sake of it, always intelligent and considered, Garavelli’s approach to her chosen subjects is as humane as it is illuminating.”

Of runner-up, Marion Scott, Brooks, said: “Nicola Barry made it her business to amplify the voices of those who had not been heard by the establishment or the public.

“Marion Scott’s tenacious reporting of the Denise Clair rape case, from its early days, was a prime example of doing just that, and sticking with a story despite the odds. In the end, she saw her subject win a significant legal victory, which has set a challenging precedent for rape law in Scotland.”

Women in Journalism Scotland, was set up in late 2016 as a networking, campaigning, training and social organisation open to women in the media at all ages and stages of their careers.

Shelley Jofre, investigations editor at BBC Scotland and co-chair of WiJ Scotland, said: “This award is exactly the kind of thing which Women in Journalism Scotland was set up to achieve.

“Since our launch by the First Minister in November 2016, our membership continues to grow. We’ve held a series of successful events aimed at helping boost the skills, knowledge and confidence of women journalists working across Scotland.

“Stronger Voice for Women on Air training events have been held in both Glasgow and Dundee, and WiJ Scotland has been a partner in the BBC’s prestigious Expert Women Scotland programme, an integral part of the broadcaster’s aim to achieve a 50:50 gender balance by April 2019.

“We have also held networking events across Scotland, with more in the pipeline. Our aim is to create an easy-to-access database of women experts which we hope will become the essential go-to guide for all broadcasters in Scotland.

“Since WiJ Scotland started up, there has been a sea-change in the way in which women’s voices are heard. As an organisation, we will continue to lobby for change and, most importantly, offer support for women in the media at every stage of their career.”

He added: “Having worked with them both, Dani Garavelli is a very worthy first winner of the Nicola Barry Award.

“I know from personal experience that Nicola was a very special talent and her empathy for the dispossessed, vulnerable and excluded shone through in her writing.

“The SNS is delighted to be working with Women in Journalism to encourage new female writers and to keep Nicola’s memory alive.”

Women in Journalism Scotland represents women in Scotland at every stage of their careers, across print, broadcast, online and digital media and communications and PR work.

Membership is £20 per year (£10 per year unwaged). Members are entitled to discounts for WIJS events and will be kept up-to-date with all of our campaigning, training and networking activities.
For further information go to www.womeninjournalism.scot

The Nicola Barry Award is open to all women journalists of any age working in print and online media in Scotland deserving of recognition for their work in issue-led reportage or commentary. This reflects Nicola’s passion for standing up against injustice in the workplace and in the wider world through her writing.

This award is given to the journalist whose submissions most effectively highlight injustices, curbs on freedom or other forms of discrimination; topics Nicola confronted in her life as a journalist.

In a career spanning over 40 years, Nicola won over 27 UK and Scottish press awards, mainly writing about social issues. She won Columnist of the Year while at The Press & Journal in three consecutive years.

Nicola worked for almost all Scotland’s main newspapers, including the Edinburgh Evening News, The Scotsman, the Scottish Sunday Express, the Daily Record and The Press and Journal.