Media release: Brownings the Bakers of Kilmarnock crowned Scottish Baker of the Year 2018 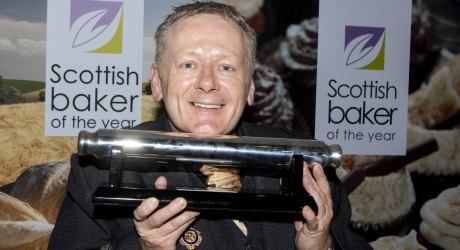 BROWNINGS the Bakers of Kilmarnock have been crowned Scottish Baker of the Year 2018 at a glittering ceremony hosted in Glasgow by Scottish Bakers, the association that supports and promotes the interests of Scottish bakers across the country.

The baker won the following awards:

John Gall added: “We have tried so hard to win this award since the competition launched in 2012 and we have always been very close. But this year we have smashed it and we truly are Scottish Baker of the Year!

“We are a family business and everyone at Brownings works hard so we really deserve this win. We have a fantastic business and we take it very seriously using traditional methods and craft skills to deliver quality every time. But we could not have come this far in the competition without the votes of all of our customers, Thank you.”

Owner of award-winning Little Venice Cake Company – industry professional and an ambassador for the GREAT Campaign, Mich Turner MBE – who presented Brownings the Bakers with their award, said: “It has given me great pleasure to be involved in the competition again this year. There have been some fantastic entries and all the prizes I have handed out to bakers have been worthy in every way. I wish all our winners well in the coming year.

“But I have known John for many years and I know full well what this prize will mean to him and his whole team in Kilmarnock. It’s a huge well done from me John and I know you will thoroughly enjoy your year, as Scottish Baker of the Year.”

Chief executive of Scottish Bakers, Alasdair Smith, commented: “It’s been a long journey to get to this point. Over 22,000 votes were received for customers’ favourite bakery products across the morning rolls, scones, individual cakes, savouries, biscuits, breads and celebration cake categories. In May, more than 850 of the most popular products in the land were delivered to Dunfermline for scrutiny by a panel of 50 expert and independent judges led by baking expert, Robert Ross. And with this competition, we are celebrating the best of the very best.”

The Scottish Baker of the Year Awards, which features Michelle McManus at the helm and couture cake queen Mich Turner MBE as its ambassador, is organised by Scottish Bakers, the trade association for bakers in Scotland which launched the competition to find the best baker in the country in 2012.

“Now in its seventh year, the competition celebrates our love of a tasty treat from our local baker and aims to crown just one hard working bakery Scottish Baker of the Year” continues Alasdair.

“With thousands upon thousands of pies, scones, loaves, savoury items, morning rolls, individual cakes and biscuits sold in Scotland every day, our bakers work hard to keep us all going, and they can be proud of their achievements in this prestigious competition.”

When we heard about this award there was no-one else we would have entered in front of this person.  Not only has he been a fantastic servant to the baking industry but a fantastic public servant with all the voluntary charity work he does.

He joined the industry aged 21 after leaving school and having a five-year spell in the army. His mum worked in the bakery for over 30 years and it was when he was young that he would come in and visit his mum after her shift that he grew a passion for baking.

He is a very well respected member of our team, he is a champion at every job he has been tasked with and is the current speed winner at flowrapping which he does at an incredible pace.

His son has now worked in the bakery for 15 years since leaving school and his daughter is the Manager of one of our retail shops serving for eight years. For his family to have given almost 100 years of total service to the baking industry is just incredible.

His mum when she was younger was the ‘Pie Shell Woman’ and he is proud to say he has also done his fair share of the ‘Waddell Pie Machine’ that was his mum’s before him.

Around four or five years ago he started losing his hearing and went to the local Hearing Support where unfortunately they couldn’t give him anything to help and this did affect his mood; however not to be defeated he learned to lip read.

Eventually a suitable hearing aid was found and the change he felt in being able to hear again was unbelievable. With this in mind he started to offer his services volunteering at Biggart Hospital (Prestwick) and Cumnock Community Hospital, spending time helping the aged. He goes into the hospitals and helps where he can, replacing batteries, cleaning hearing aids or just offering companionship to others. In fact, if he notices that someone hasn’t turned up for a clinic he goes and visits them at home. He knows how it feels have sensory deprivation and dedicates his spare time to offer others friendship and support through the Sensor Impaired Support Group.

He is also a Gold Member Blood Donor having recently hit the 60 pint mark. This is another testament to his good nature and always willing to help others.

When he is not in the bakery or volunteering he is spending time with his family, his Bond Troop Army mates, visiting Tenerife or happy in Costa with a cup of coffee.

We aim to be an integral part of each member’s business by providing support for bakers of all sizes.

Scottish Bakers manages both The World championships Scotch Pie Awards each year The Scottish Baker of the Year Awards to recognise and celebrate excellence in the sector.

But most importantly, Scottish Bakers belongs to its members; we are all there for their benefit and are proud of our motto, ‘for the good of all’.

With thanks to our sponsor

With thanks to our sponsors: