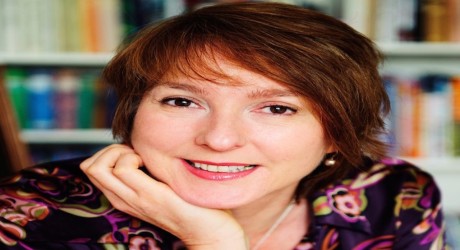 It is one of six novels recognised by the prize, which celebrates the best adventure writing. The winner’s prize money is £15,000.

“I’m so pleased that Saraband agreed to publish Looking for Evelyn, so pleased people are buying it, and unbelievably thrilled that I have been shortlisted for an award sponsored by such a talented and successful author,” said Maggie, who lives in Glasgow.

Looking for Evelyn, Maggie’s second novel, transports the reader to another magical time and place: 40 years ago to the wilds of southern Africa.

Published in 2017, the book combines inspiration from both her childhood memories of life in Africa and her experience as a journalist.

Telling the dramatic story of two women who uncover the scandalous secrets that shattered a remote expatriate outpost in the Zambian bush in the 1970s, Maggie’s book powerfully evokes the very special colours, sounds and smells of Africa.

It is set against a background of tense post-colonial race relations, political turmoil and witchcraft, and paints a vivid picture of life in an Africa that was gloriously beautiful but also incredibly dangerous.

Maggie grew up in Zambia and is an award-winning author and journalist who has written for a range of national newspaper titles, including The Times, The Herald, Daily Mail and Daily Record.

She has an MLitt (Distinction) from the University of Glasgow. Her debut novel, Paris Kiss (Saraband, 2015), won the Curtis Brown Prize, was runner-up for the Sceptre Prize and was long-listed in the Mslexia First Novel Competition. The German edition appeared on bestseller charts and the novel has also been translated into Czech.

The winner of the £15,000 prize will be announced at a special ceremony in London on September 20.

MEDIA RELEASE issued by Mike Ritchie Media. You too can share your stories (aka press or media releases), on this site. Email here for more information.