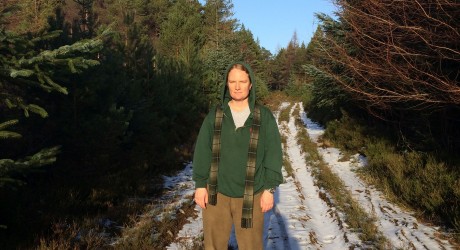 ON behalf of the Scotland + Venice partnership, Creative Scotland is delighted to announce that Charlotte Prodger has been selected to represent Scotland at the 58th International Art Exhibition – La Biennale di Venezia.

Commissioned and curated by Linsey Young with Cove Park, Prodger’s presentation will be a major solo exhibition of new work opening on 11 May 2019 and running until 24 November 2019.

The commission for Scotland + Venice will provide her with the opportunity to produce a new single channel video work that will build on her sustained exploration of ‘queer wilderness’.

Prodger will develop this new work over a series of research and production residencies at Cove Park, one of Scotland’s foremost residency centres and will be supported by the artist’s production consultant, Mason Leaver-Yap. On its return to Scotland, the work will tour the Highlands and Islands while Dutch arts organisation If I Can’t Dance, I Don’t Want To Be Part of Your Revolution, who are supporting the production of the work, will lead on a subsequent international tour.

Discussing the forthcoming work for the Biennale, Charlotte Prodger commented: “Growing up in the rural, agricultural environment of Aberdeenshire as a young person, I understand landscape and queerness as inherently linked. And, as someone who identifies as queer, I’m excited by the fluid borders of identity – especially the perceived edges of gender and geography. The productive crux of this new work is precisely where all these things come into contact with one another.”

Nominated for the Turner Prize this year, Prodger won the Margaret Tait Award in 2014, was shortlisted for the Jarman Award in 2017 and, in the same year, was awarded a Paul Hamlyn Award. Scotland + Venice provides Prodger with a major international platform at this key moment in her practice.

On being selected for Scotland+Venice 2019, Prodger continued: “I feel honoured to have this opportunity and it means a great deal to me to represent Scotland in Venice.

“The public funding I received through six years of free higher education – and subsequently in the form of artist bursaries to develop work across several years – has been absolutely crucial in enabling me to realise and sustain a practice. In addition to this, the generosity of friendships and local dialogues within Glasgow’s art, music and queer community continue to be fundamental in the development of my work.”

Linsey Young, curator for Scotland + Venice 2019, commented: “It is a great honour to have the opportunity to commission Charlotte Prodger to represent Scotland at the 58th International Art Exhibition – La Biennale de Venezia. I am particularly thrilled to have the opportunity to work with Charlotte, Alexia Holt and the team at Cove Park alongside Mason Leaver-Yap to share Charlotte’s work within the unique context of the Biennale.”

Alexia Holt, associate director of Cove Park, commented: “Cove Park is thrilled to have this opportunity to work with Charlotte as she produces a major new commission for such an important international platform. Charlotte’s first residency was at Cove Park in 2010 and we have followed the development of her work closely over the last eight years.

“We were delighted to be able to offer Charlotte a residency in the summer this year to support her practice at such an exciting point in her career. Working with curator Linsey Young, artist’s production consultant, Mason Leaver-Yap, and the wider project team promises to be a wonderful experience and we are very pleased the Scottish presentation of Charlotte’s work for Venice will take place at Cove Park in 2020, our 20th anniversary year.”

The Venice Biennale is recognised as the foremost global presentation of visual art. This will be the ninth presentation supported by the Scotland + Venice partnership (Creative Scotland, National Galleries of Scotland and the British Council Scotland), continuing to build Scotland’s strength and reputation as an important international voice in visual art.

“Charlotte is a remarkable artist who is making important and compelling work that resonates with audiences nationally and internationally. This new commission will enable her to make a rich and distinctive contribution to the most significant international festival of contemporary art, the Venice Biennale. We are excited to be working with Charlotte, Cove Park, Linsey Young and the many other collaborators who will be making the project possible and very much look forward to premiering the new work in May 2019.”

Find out more about Scottish presentations in Venice, past and present:

Charlotte Prodger was born in Bournemouth, UK in 1974. She studied at Goldsmiths, London and The Glasgow School of Art and lives and works in Glasgow.

Prodger received the 2014 Margaret Tait Award and 2017 Paul Hamlyn Award. She is currently nominated for the 2018 Turner Prize.

Located on the west coast of Scotland in Argyll and Bute, Cove Park runs an annual programme of creative development residencies for national and international artists working in all art forms and at all stages in their careers. Cove Park’s visual arts programme offers both residencies and commissions, produced and curated by Alexia Holt, enabling artists to develop new work in the context of an outstanding 50-acre rural site overlooking Loch Long. The organisation’s award-winning Artists Centre, a purpose-built space for artists and visitors, opened in 2016 and made possible the development of Cove Park’s innovative creative learning programme led by current and former residents. Cove Park was founded in 1999 by Eileen and Peter Jacobs and will celebrate 20 years of its residency programme in 2020.

If I Can’t Dance, I Don’t Want To Be Part Of Your Revolution is an art organisation based in Amsterdam, dedicated to exploring the evolution and typology of performance and performativity in contemporary art. We do this through the development, production and presentation of commissioned projects with artists, curators and researchers on the basis of long-term collaboration and support. Next to Charlotte Prodger, If I Can’t Dance works in its current edition with Mounira Al Solh, keyon gaskin and Myriam Lefkowitz.

Members of the Scotland+Venice Selection Panel for 2019:

Previous Scotland+Venice presentations: Rachel Maclean (curated by Alchemy Film and Arts in 2017), Graham Fagen (curated by Hospitalfield Arts in 2015); Duncan Campbell, Hayley Tompkins and Corin Sworn (curated by The Common Guild in 2013), Karla Black (curated by the Fruitmarket Gallery in 2011) and Martin Boyce (curated by Dundee Contemporary Arts in 2009).

Creative Scotland is the public body that supports the arts, screen and creative industries across all parts of Scotland on behalf of everyone who lives, works or visits here.  We enable people and organisations to work in and experience the arts, screen and creative industries in Scotland by helping others to develop great ideas and bring them to life.  We distribute funding provided by the Scottish Government and the National Lottery. For further information about Creative Scotland please visit www.creativescotland.com Follow us @creativescots and www.facebook.com/CreativeScotland

The British Council is the UK’s international organisation for cultural relations and educational opportunities. We work with over 100 countries in the fields of arts and culture, English language, education and civil society. Last year we reached over 65 million people directly and 731 million people overall including online, broadcasts and publications. We make a positive contribution to the countries we work with – changing lives by creating opportunities, building connections and engendering trust. Founded in 1934 we are a UK charity governed by Royal Charter and a UK public body. We receive 15 per cent core funding grant from the UK government.