Media release: The third Findhorn Bay Festival programme has been launched – a festival for all, showcasing local talent to artists of national and international renown 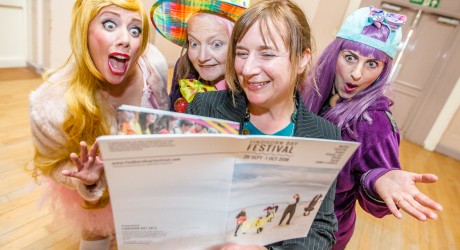 From Wednesday 26 September – Monday 1 October, Moray will come alive with a spectacular showcase of arts and cultural events during Scotland’s Year of Young People 2018.

The multi award-winning biennial festival, produced by Findhorn Bay Arts, is a six-day celebration set in unexpected spaces and scenic locations around the Bay of Findhorn in Moray.

The festival brings something for all with a vibrant mix of theatre, performance, music, dance, visual arts, exhibitions, talks, tours, education activities and more including Culture Day Forres – considered to be Scotland’s only Culture Day extravaganza, free for all the family to enjoy.

The festival opening concert will welcome one of Scotland’s most accomplished and authentic interpreters of traditional Highland fiddle music, multi award-winning Duncan Chisholm. This very special opening concert will take place in the historic St Laurence Church in Forres. Duncan will be joined by his extended line-up, now well known as The Gathering, featuring some of Scotland’s finest talent on the traditional and classical music scenes to perform music from his new album Sandwood.

Music features prominently in the festival programme. Recently crowned BBC Radio 2’s ‘Folk Singer of the Year’, Karine Polwart will play her only Scottish date with music from her forthcoming album in Forres, alongside her brother, Steven Polwart, and the Fair Isle multi-instrumentalist, Inge Thomson.

Fuelled by a visceral punk spirit, The Langan Band is set to get the festival crowd dancing by the sea in Findhorn. Newly-crowned winners of the Scottish Awards for New Music, Mr McFall’s Chamber, will be joined by the local Bukhari Community Choir for an early Saturday evening concert taking place in the stunning Universal Hall.

A triple bill will feature Blue Rose Code (The Skinny 2017 Scottish Album of the Year), one of the brightest rising stars on the UK roots music scene Adam Holmes & the Embers and local emerging musician, Michiel Turner, for a night of supreme musical talent.

From bittersweet memories to rude and raunchy, poet and playwright, Liz Lochhead (Scots Makar until 2016), brings her beguiling mix of poetry, monologues and music complemented by the gentle and soulful saxophone of Steve Kettley in Somethings Old, Somethings New.

We’re treating you to a double-dose of the rip-roaring, chain smoking nae-messin’ heroine as Alan Bissett puts on a double bill with the Fringe First award-winning The Moira Monologues & More Moira Monologues.

Returning to the festival line-up, Scottish Opera is back on the road with Opera Highlights promising an evening of operatic treasures in Forres Town Hall. Moray based dancer and choreographer, Karl Jay-Lewin, will present Extremely Pedestrian Chorales where the prosaic and commonplace experience of the pedestrian as an act of beauty, meaning and gentle comedy.

Themes of migration, language and modern identity are explored throughout the festival programme.

You can take a guided walk spotting the birds of Findhorn Bay with A9 Birds; meet the Scots Scriever at the Falconer Museum’s Birds & Wirds exhibition; join in on a discussion on Scotland as a bi-lingual nation; or visit the Waves O’ Flight open exhibition on the edge of the Findhorn Bay Nature Reserve.

Throughout the festival weekend, you can see Swarm Sculptures forming and reforming with Lucy Suggate and dancers from Dance North’s (previously Bodysurf Scotland) community dance programme. Northern Flyway, by Inge Thomson and Jenny Sturgeon, will take you on a musical journey exploring the connection between people and birds against a lush evocative skyscape of stunning visual imagery.

At the heart of the third festival, Findhorn Bay Arts presents the world-premier promenade theatrical adaption of The Buke of the Howlat, a 15th century epic Older Scots poem – written by Morna Young, firected by Ben Harrison and supported by the Year of Young People 2018 Event Fund.

A team of actor-musicians, a choir and a community cast featuring talented young people, work with an award-winning creative team, to re-tell this very old and very local story of wealth, power, identity and creativity. Set at dusk, you will follow the outdoor musical adventure around the shrubbery in the grounds of the historic Brodie Castle.

The festival offers a feast of visual art. Award-winning Scottish documentary photographer, Jeremy Sutton-Hibbert (Time, National Geographic), will present a series of striking black and white images shot aboard the seine net fishing boats, Mairead and Argosy, in the North Sea at The Old Station in Hopeman. The John Byrne Touring Exhibition will showcase visual arts, film, music and photography created by young people from across the North East of Scotland at Moray College UHI and the Travelling Gallery brings contemporary art to Forres.

For children and families, Catherine Wheels Theatre Company bring the award-winning and touching tale of Martha, which has been delighting young audiences over the last 20 years to the festival.

A Family Cabaret of pure imagination is set to amaze and delight with international performers, Steve Cousins aka The Balloonatic, Cowboy Duke Loopin’ galloping into town and hula-hooping queen Toni Smith joined by local act the Mad Hatters of Moray. NESTS by Frozen Charlotte and Stadium Rock features a young lead actor in a beautiful, authentic performance exploring the dynamic between adult and child.

Culture Day Forres returns for a fifth year – a FUN, FREE family day out, jam-packed with exciting exhibitions and performances and lots of have-a-go activities. The day will see the streets, parks, shops and public buildings of Forres come alive with a carnivalesque explosion of art, music, film and dance, talks and tours and more.

New to the festival line-up this year, is a focus on Making More of Moray through the celebration of quality local food, with the fertile Moray landscape providing a plentiful larder to sample from.

You can try locally-sourced organic bites in a Pop-Up Project Café, visit growers in their gardens on vintage bus tours, shop at the mini-market of local organic produce on Culture Day or join a tantalising multi-cultural music and food event with headline act Shooglenifty, who fuse the energy and passion of their traditional roots, with infectious dance grooves spiced up by the band’s influences from Rajasthan. The Making More of Moray project is supported by the Moray LEADER Programme and EventScotland, part of the VisitScotland’s Events Directorate.

Kresanna Aigner, Findhorn Bay Festival director, said: “We are honoured to be presenting the third Findhorn Bay Festival programme. With a line-up of award-winning, internationally-renowned artists from across Scotland, to local artists from Moray too, the programme offers something for every taste and all ages set in locations around the stunning Bay of Findhorn and Moray coastline. Everyone can get involved – from education and workshop activities, to participating in Culture Day Forres or becoming a Festival volunteer, we welcome all to experience a fantastic explosion of arts and culture with us.”

Paul Bush OBE, VisitScotland’s director of Events, said: “Findhorn Bay Festival is a fantastic celebration of Scotland’s arts and culture and regional heritage, and it has been great to see this biennial event continue to develop and grow. We are delighted to be supporting Making More of Moray through EventScotland’s National Events Programme, with a diverse line-up of events and activities showcasing the very best in local and Scottish produce. It is also great to see the festival fully embracing the Year of Young People 2018 in its programme with plenty to discover for children and families. The exciting new production of The Buke of the Howlat will be the perfect opportunity for our young people to present their creative talents to the world and help us reinforce Scotland’s position as the perfect stage for events.”

Laurie Piper, operations manager for Moray Speyside Tourism, said: “The Findhorn Bay Festival has established itself as a cornerstone in the region’s cultural calendar. The diversity of events, activities and performances included in the festival illustrates the strength and depth of the region’s cultural offering and adds hugely to Moray Speyside’s appeal to visitors from near and far.”

Philip Deverell, director, Strategy, Creative Scotland, said: “We are pleased to be supporting Findhorn Bay Festival through National Lottery Funding. Findhorn Bay Festival have once again offered up an exciting and varied programme of outstanding performances and activities from local, national and international artists and organisations. The festival is a key event for the North-east of Scotland that not only provides the local community and visitors with the very best in cultural experiences but also brings proven economic and social benefits to the region.”

EventScotland is working to make Scotland the perfect stage for events. By developing an exciting portfolio of sporting and cultural events EventScotland is helping to raise Scotland’s international profile and boost the economy by attracting more visitors. For further information about EventScotland, its funding programmes and latest event news visit www.EventScotland.org. Follow EventScotland on Twitter @EventScotNews.

EventScotland is a team within VisitScotland’s Events Directorate, the national tourism organisation which markets Scotland as a tourism destination across the world, gives support to the tourism industry and brings sustainable tourism growth to Scotland. For more information about VisitScotland see www.visitscotland.org or for consumer information on Scotland as a visitor destination see www.visitscotland.com.

MEDIA RELEASE issued by Findhorn Bay Arts. You too can share your stories (aka press or media releases), on this site. Email here for more information.