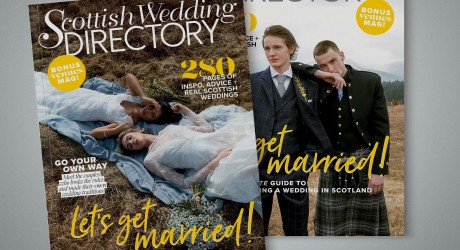 SCOTTISH Wedding Directory has released a cover shoot featuring two brides and two grooms for a split-run cover on its summer issue.

The magazine is thought to be the first mainstream bridal publication to feature two brides and two grooms on the cover, reflecting the magazine’s progressive and inclusive identity, which celebrates love however people choose to express it.

The summer issue includes features covering all aspects of wedding planning, from bridal and kilt trends to where to honeymoon, and – as has been true of Scottish Wedding Directory since same-sex weddings were legalised – such as real wedding stories from same-sex couples and a feature on planning a same-sex wedding, talk specifically to same-sex couples.

Christopher Phin, head of Scottish Wedding Directory, said: “The most important thing for me personally is that this split-run cover wasn’t conceived as a stunt or a gimmick. I love that this isn’t ‘the gay issue’, or that we’ve covered same-sex weddings only in this one issue. Call it naivety, but I’m hopeful the world might just be starting realise that the only thing special and worth celebrating about an LGBTQ+ wedding is the love the couple have for each other.”

Natasha Radmehr, editor of Scottish Wedding Directory, said: “I’m really proud to live in a country in which same-sex marriages are legal, and was surprised after we shot these covers to find that no other mainstream wedding magazine in the UK seems to have ever featured a same-sex couple (or models representing a same-sex couple) on their front cover. It’s important to me to create a magazine that makes everyone feel included, regardless of who the reader is marrying or what their idea of a perfect wedding looks like.”

Since the Marriage and Civil Partnership Act in 2014, Scotland has been considered by IGLA Europe’s Rainbow Report to be one of the most progressive countries in Europe for LGBTI equality. In England and Wales, the number of married gay couples doubled in 2017.

Christopher states: “Most of the weddings we showcase are between a man and a woman – just like most of the weddings that take place in Scotland – but right alongside them, with no fuss and no special treatment, are weddings of people from all parts of the LGBTQ+ spectrum.

“I have nothing but respect and appreciation for other titles which focus exclusively on same-sex weddings – like the Pride movement, it’s so important that people can feel represented and valid when so much of the mainstream media can feel exclusionary – and I’m just happy that a mainstream title such as Scottish Wedding Directory can show there’s another inclusive way to celebrate love that can sit right alongside them.”

The issue of Scottish Wedding Directory is on sale 28th June, and is available in newsagents and supermarkets throughout Scotland as well as at scottishweddingdirectory.co.uk.

DC Thomson Media is one of the leading media creators in the UK.  The company’s headquarters is in Dundee, Scotland, with a London base in Fleet Street.  DC Thomson Media publishes newspapers, magazines and comics, and has an extensive e-commerce and events portfolio, as well as interests in gaming and radio.

For more than two decades, Scottish Wedding Directory has been brides and grooms’ best pal, the one who’s been there and done that, who can dish on the latest wedding trends one minute and dispense sage advice the next. At our heart is a desire to champion Scottish wedding companies and proudly showcase Scotland’s vibrant wedding scene, and with our clean, high-end aesthetic and gorgeous imagery, getting hitched north of the border has never looked so good. Scottish Wedding Directory is a true multi-platform title, and we share our ‘aspirational, but attainable’ message with a huge audience across social, online and in print. We are the authority on Scottish weddings.

MEDIA RELEASE issued by DC Thomson Media You too can share your stories (aka press or media releases), on this site. Email here for more information.