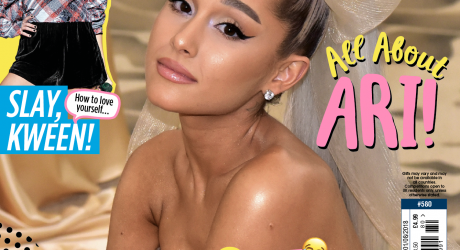 SHOUT magazine is celebrating its 25th year with a celebration of all things nineties!

When teen mag, Shout, first hit the newsstands in 1993, its readers were watching Gladiators, Byker Grove and Neighbours, listening to East 17 and 2 Unlimited and wearing combat trousers and halterneck tops.

The young models gracing the pages of some of Shout’s earliest issues include top TV presenters Holly Willoughby and Emma Willis, and actress Keeley Hawes.

Shout has been a teen girl’s best friend for 25 years, providing a positive, fun, inspiring place for them to come for content that supports, inspires and entertains. And in that time, an astonishing near 70 million copies of Shout have been sold.

The original 1993 magazine cover features stars including East 17, Take That, Keanu Reeves, ‘hunks’ from Baywatch and Neighbours and the chance to win Beverly Hills 90210 goodies.

Inside, a Topshop fashion spread marked the first time they had added size 8s to their range, while there were reader makeovers, posters, features on bullying, body issues and friendship and a poster featuring lyrics to Take That’s Why Can’t I Wake Up With You?

Louise Kettle, editor of Shout magazine, said: “It’s amazing to see how the 90s fashion trends have well and truly come back – despite us all thinking it was the decade that style forgot.

“High-waisted jeans and bodysuits… who would ever have thought they would have made a comeback? But these days the high street is packed full of 90s throwbacks.

“Celebrating Shout’s 25th year has given us all the chance to take that, often cringeworthy, walk down memory lane. But it turns out we were all style icons of our time. It’s been amazing to see all the trends and reminisce about the music we were listening to and the programmes we were watching.”

All Saints, the girl band who formed that very year and are making their comeback in 2018, managed to make combat trousers look edgy yet girly by pairing them with crop tops and halternecks.

Grunge was all the rage with tartan shirts – often worn tied around the waist – with loose fit, ripped mom jeans and lots and lots of black.

Doc Marten boots worn with oversized jumpers, denim shorts and tights, indie bucket hats as made iconic by the likes of The Stone Roses and Oasis, and the rise of chunky trainers – including the rather fabulous Reeboks Pumps where you could actually increase the cushioning around your ankles by inflating them yourself. Serious innovation!

Now in 2018, it’s never been tougher to be a teenage girl – navigating social media and the pressure of perfection that comes with it, thinking about the future, juggling school work and friendships.

But Shout has embraced this new digital age.

“The original premise for Shout 25 years ago was ‘if it’s in her life – it’s in Shout’ and that’s as relevant today as it was then – just like our magazine”, Louise added.

“Undoubtedly times have changed for teens but Shout has moved with those times and that’s why we’ve had such longevity. Back in the nineties, these girls had no smart phones to interact with their friends. They’d use the house phone or even venture to the local phone box to let their friends know the latest with the boy they fancied.

“We are now met at almost every turn online by unrealistic body images that create a pressure to be ‘perfect’.

And the potential for trolling and online bullying has opened up a whole new world of worry to our readers.

“Times have changed so much and Shout has evolved alongside the lives of teen girls to deal with this.

“Shout’s core aim is always to support our gang of loyal readers, boost their confidence and let them know they’re not alone.”

To mark the anniversary year, Shout is launching an internship programme to help people keen to break into the media industry. The successful candidate will be hosted at DC Thomson  Media’s Dundee headquarters for a two-week immersive internship that will offer a comprehensive overview of magazine publishing.

Louise said: “We’re very aware of how tough it is to gain experience in the industry – financial constraints often exclude those with great talent and potential. This is why we wanted to offer an all-expenses paid opportunity through our annual internship programme.”

High-waisted jeans, halterneck tops, strappy vests, combat trousers and grungy tartan shirts were all the rage back in 1993.

But do you remember the shops we used to venture to – from Tammy Girl to Bay Trading, to C&A, MK One, Woolworths and Dolcis.

Boybands were massive in 1993. Take That were churning out hits like Relight My Fire and Pray, while East 17, Boyzone and Boyz II Men were beginning their chart domination. The inimitable Mr Blobby was Christmas number one in 1993.

The ten most popular hits in the UK singles charts in 1993 were:

3 – Whitney Houston – I Will Always Love You

9 – The Bluebells – Young At Heart

Matthew Kelly took over as presenter on Stars in Their Eyes and Bill Clinton’s inauguration as the 42ndPresident of the United States was watched by nearly 30 million viewers worldwide.

The top ten films released worldwide in 1993 were:

Our bikes weren’t cool unless they had Spokey Dokeys on them and our bedrooms were kitted out with colourful beaded curtains, lava or fibre optic lamps, troll dolls and Tamagotchis. We played on Gameboys and listened to our tunes on Sony Walkmans until, in around 1995, the Sony Discman was the ultimate accessory. And we thought we were the business if we had a TV/VHS combo!

In the mid-90s, just seven per cent of Brits had a mobile phone, while only 2.5 per cent of households had access to the internet – remember that annoying dial-up tone?