Media release: Top chefs serve up a new series of their culinary road trip, as they explore Canada 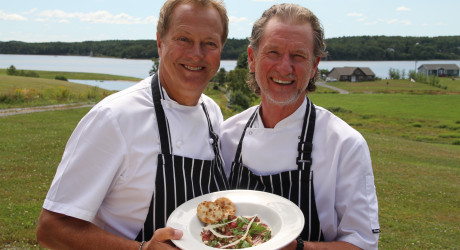 TOP chefs, Paul Rankin and Nick Nairn, set off on their latest epic culinary road trip and cultural journey of discovery in their new series, which starts this Friday, 10 August at 8pm on STV.

Following the trail of the Ulster Scots who travelled to the New World to start a new life, and having met a variety of fantastic food producers along the way, Paul and Nick cook a special three-course meal for some descendants of Canadian history’s intrepid Celtic settlers.

Paul, who was born in Scotland and brought up in Ballywalter, County Down, became the first chef from Northern Ireland to be awarded a Michelin Star when he won the prestigious accolade in 1999. He quickly became one of TV’s favourite chefs after appearing in a variety of cookery programmes including Ready Steady Cook and the Great British Menu. The author of five cookery books, Paul also made his name running The Rankin Group chain of cafes and restaurants which included the acclaimed Cayenne and Roscoff in Belfast.

Nick became the youngest Scottish chef to win a Michelin star in 1991 after opening his first restaurant, Braeval near Aberfoyle in Stirlingshire. His successful TV career began a few years later when he appeared on shows includingReady Steady Cook and Great British Menu (cooking lunch for Her Majesty The Queen on her 80th birthday) as well as his own Wild Harvest, Wild Harvest 2 and Island Harvest series. The author of 11 books, he also runs Nairns Cook School in Port of Menteith and Nick’s Pizza Bar in Aberdeen.

Nick Nairn said: “Paul and I first met at a dinner in London over 20 years ago and have been the best of pals ever since, so we love working together. We had lots of fun making our three previous series and touring Scotland, Ireland and America to learn all about the stories of the Ulster Scots whilst indulging our passion for great local produce and fantastic cooking. Our latest adventure in Canada, was no different – it was an absolute delight to make and a joy to explore such a beautiful part of the world.”

Paul Rankin added: “Nick and I had a grand time exploring the stunning areas where Canada’s Ulster-Scots first settled in the New World. It was a real pleasure too for us to have the honour of cooking for some wonderful folk who are their direct descendants. Making our Food Trip programmes isn’t really like work at all for us as we’ve such fun doing it so it feels more like a holiday. We have great banter and craic, although we do tend to lead each other astray!”

In the first episode of Paul and Nick’s Big Canadian Food Trip the series kicks off in Oshawa, Ontario where Paul and Nick find out about car manufacturer RS McLaughlin of General Motors Canada and his brother, John James McLaughlin, the inventor of Canada Dry Ginger Ale. Along the way the chefs discover Canadian sweet corn, visit a flour mill in the village of Tyrone and find some pastured lamb, all to prepare a three-course meal at the grand Parkwood Estate, the former residence of RS McLaughlin.

The eight episodes in the new Paul and Nick’s Big Canadian Food Trip starts on STV at 8.00 – 8.30pm on Friday 10 August, and the series will also be available to watch live or on catch-up on STV Player.