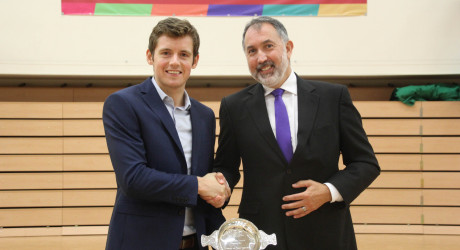 THE University of the Highlands and Islands has recognised professional squash player, Greg Lobban, with an Honorary Blue award. Introduced in 2017, the Sporting Blues awards recognise the sporting excellence of the university’s students and alumni.

Greg (26) from Inverness completed an HND in sports coaching with development of sport at Inverness College UHI in 2011, with A passes in all of his graded units. He has gone on to become one of the best squash players in the world, with a current career-high ranking of 30. He has represented Scotland at two Commonwealth Games, was the World Doubles Champion in 2016 and has a long list of Professional Squash Association World Tour titles from New Zealand, Slovakia, USA, Switzerland and many other countries.

Greg was presented with his award at a ceremony at Perth College UHI on Wednesday 15 August. He spoke about how much he had enjoyed his studies and his pride in being one of the first recipients of an Honorary Blue from the university. Greg was joined by his wife, Donna, who was herself the Commonwealth Gold winner at Brisbane this year and is currently ranked 17th in the world.

Presenting the award, Dr Iain Morrison, dean of students, commented: “Greg is an inspirational figure for our students and someone whom the university is proud to have as an alumnus. He has already achieved so much in his sport at a world level without even reaching his peak yet. It is extremely gratifying to hear Greg talk about how his studies with us gave him the confidence and grounding on which his subsequent career has grown. He is an extremely worthy winner of our first Honorary Blue.”

Emma Robson, activities and events regional co-ordinator for the Highlands and Islands Students’ Association (HISA) added: “The Sporting Blues awards are a fantastic shared initiative by the university and the students’ association. HISA are thrilled to reward our student talent and showcase their exceptional sporting achievements. It is vital that students take part in extra-curricular activity and sport has grown across the university over the past couple of years. Thanks to students like Greg, students can feel inspired that, if they want to push that extra mile, the road ahead is waiting for them!”

University of the Highlands and Islands · Squash · Scotland-wide