Media release: Guest stars set to appear in the last ever Still Game 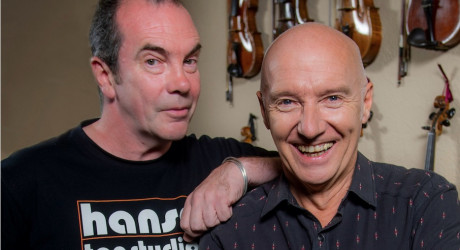 STARS of TV, film and music – including Martin Compston, Midge Ure and Amy MacDonald – will appear as guest cast in the ninth series of Still Game, made by BBC Studios in Scotland for BBC One.

The stellar array of guest stars appear alongside the original cast including writers and stars, Ford Kiernan and Greg Hemphill who play evergreen pensioners, Jack Jarvis and Victor McDade.

Filming on the series began last week at BBC Scotland’s Dumbarton Studios and the six-week shoot will also see filming take place in locations across Glasgow in what promises to be a ‘must-see’ finale for fans across the country.

Midge Ure, who filmed his comedy scenes earlier this week, is delighted to make a cameo appearance in Craiglang: “I’ve been a fan of Still Game for a while. My friend, Danny Mitchell, who I co-wrote ‘If I Was’ with sent me a DVD of the first couple of series a long time back and I fell in love with it then.

“The fantasy and the reality of acting are two very different things, however. In your head you’re Robert DeNiro but in reality you’re something very, very different! It’s amazing how quickly you clam up.

“Watching the whole process of filming was amazing, I always find that stuff fascinating. It’s very different from doing pop promos. This supersedes the OBE. Being in Still Game is like the comedy version of getting a Blue Peter badge which I wear with pride. The way I see it, if you’re going to be humiliated it might as well be in a comedy you love.”

Steven Canny, BBC Studios Comedy, executive producer, says: “We’re delighted that such brilliant performers from the worlds of music, comedy and gritty television crime are coming to join us. Alongside our brilliant core cast they look well set to give the show the send-off it deserves. I can’t wait for everyone to see these episodes.”

Still Game was commissioned by Shane Allen, controller Comedy Commissioning and Charlotte Moore, director of BBC Content. It will be executive produced by Steven Canny for BBC Studios and Gregor Sharp is the Commissioning Editor for BBC Comedy. The series is produced by Jacqueline Sinclair and directed by long-term Still Game collaborator, Michael Hines.

Since making its TV debut in 2002, Still Game has become a comedy phenomenon. When it returned in 2016 after a nine-year hiatus, it became the most-watched TV programme in over a decade in Scotland attracting more than half of the viewing audience.

Still Game highlights the BBC’s continued commitment to production made in Scotland for UK-wide audiences including productions like Two Doors Down, Shetland, The Cry and The Victim.