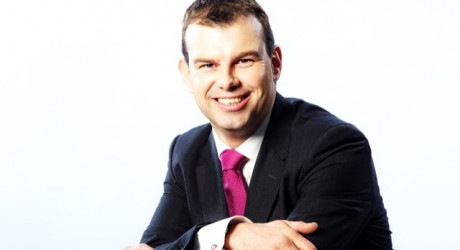 JAMES Cook, North America correspondent for BBC News, is returning to Scotland to take up a key position on the nightly news hour on the new BBC Scotland channel which will launch early next year.

James, who left BBC Scotland just over three years ago to join the corporation’s Los Angeles bureau, will be the chief news correspondent on the programme which will bring national and international news to audiences across Scotland.

His appointment follows the announcement last month that Martin Geissler, a news correspondent with ITN, and Rebecca Curran, who is currently based in BBC’s Aberdeen newsroom, will jointly anchor the news programme.

Programme editor, Hayley Valentine, said James is a significant addition to the team she is assembling for news hour which will broadcast each night at 9.00 pm from BBC Scotland’s Pacific Quay centre in Glasgow from February 2019.

She said: “James has star quality and will be a huge asset. This is one of the key appointments on the new programme and James was the outstanding candidate.

“He will bring all of his editorial rigour, authority and energy, and we are delighted that he has chosen to come back to Scotland at such an exciting and important moment in BBC Scotland’s history.”

During his posting in North America he has reported on many major stories across the length and breadth of the United States, from shootings and racial unrest, to wildfires and hurricanes. He recently travelled with President Donald Trump, covering his UK and Europe trip.

Before this assignment he was Scotland correspondent, covering with distinction the Scottish Independence Referendum campaign. He chaired the The Big, Big Debate at the Hydro in Glasgow, in front of thousands of 16-17 year-old registered voters.

He is widely viewed as one of Scotland’s top broadcast journalists – a great story-teller and a hugely engaging TV reporter.

He had been Scotland correspondent for BBC News since 2008, reporting from around the country for the One, Six and Ten o’clock news on BBC One as well as for Radio 4, 5 live and the BBC News Channel.

James’s career in journalism began more than 20 years ago in local radio where he first read the news at the age of 15, going on to interview Prime Ministers and pop stars before moving to the BBC in 1998 as a sub-editor. He went on to present a variety of news programmes which included Reporting Scotland and Good Morning Scotland.

Gary Smith, head of News and Current Affairs, BBC Scotland, said: “James has a fantastic track record of journalism with the BBC and his return highlights the ambition we have for the new programme.”