Media release: New, fresh look for The Press and Journal 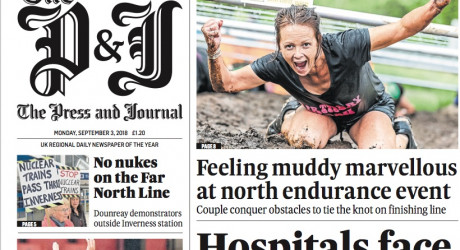 THE Press and Journal, the UK’s top-selling regional newspaper, has unveiled a fresh new look.

The Press and Journal has updated its world famous masthead and front page.

The newspaper, recognised as Scotland’s oldest daily newspaper and one of the oldest English language titles in the world, has embraced its colloquial name and introduced a simpler P&J masthead.

This brings more flexibility to the front page design and gives more opportunities to project the wealth of content available to readers.

Richard Neville, editor-in-chief of morning newspapers at DC Thomson Media, said: “It’s a bold move but The Press and Journal, like all communities in the north and north east of Scotland, must continually evolve and adapt to the modern world by trying new things. We continue to invest in quality content and I’m confident that you won’t find better reported local news anywhere in the north of Scotland.”

In the recent Audit Bureau of Circulation report, The Press and Journal is ranked as the highest-selling regional newspaper in the UK.

Inside The Press and Journal, the news section has been rearranged and redesigned to create a better flow of local, Scottish and national news. There is also a new comment section, Agenda, in the heart of the paper with an extra column a day and a new rota of columnists.

Following reader feedback, family announcements have been given their own daily section which will now also feature obituaries of well-known local, national and international figures.

Alongside these changes, The Press and Journal has also introduced a brand new food and drink magazine, The Menu on Saturday.

The roll-out of the new look P&J was supported by a local radio campaign as the newspapers hit the shelves on Saturday 1st September.

The Press and Journal is on sale Monday to Saturday.

DC Thomson Media is one of the leading media creators in the UK. The company’s headquarters is in Dundee, Scotland, with a London base in Fleet Street. DC Thomson Media publishes newspapers, magazines and comics, and has an extensive e-commerce and events portfolio alongside interests in gaming and radio.

THE PRESS AND JOURNAL

The Press and Journal features varied editions which are produced each day and circulated across the north and north-east of Scotland. Each edition reflects community activity and interests of the individual area.  The newspaper’s aim is to remain local and relevant to its readers while providing Scottish, national and international news.