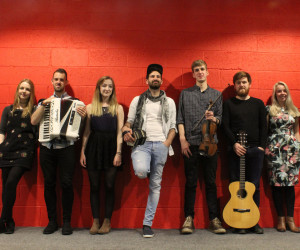 SOME of Scotland’s finest young folk musicians are out visiting their home areas and London after releasing their album at Celtic Connections earlier this year – thanks to the TMSA (Traditional Music & Song Association of Scotland).

Audiences are treated to a mix of new material written and composed by these outstanding young musicians as well as innovative arrangements of traditional tunes – supported by Project Musical Director, Anna Massie – one of Scotland’s foremost guitarists well known for her work with the likes of Blazin’ Fiddles. Anna was a former winner of the BBC Young Traditional Musician of the Year Award back in 2003 and toured with the TMSA Young Trad Tour in 2015 as an accompanist.

TMSA convener, Fiona Campbell, said: “The annual TMSA Young Trad Tour and album is always a great opportunity to showcase the rising starts of Scotland’s traditional music scene but this year we also get the bonus of performing a TMSA Young Trad Tour Showcase in London featuring the 2017 and 2018 winners of the BBC Scotland Young Traditional Musician of the Year, alongside previous and current finalists at Cecil Sharp and to the All Party Parliamentary Folk Arts Group at the Houses Of Parliament. This is really exciting for the young musicians and I have no doubt the group will act as fantastic ambassadors for both the TMSA and Scotland.”

Siobhan Anderson, music officer at Creative Scotland, said: “This is a fantastic opportunity for budding young musicians to get a taste of recording and touring at a professional level. It is great to see their talents being showcased at Cecil Sharp House in London as well as the opportunity to play at the Houses of Parliament, while also allowing the musicians to return to their home towns to perform for the communities who have supported them. Considering the range of acclaimed musicians who have taken part in the Young Trad tour in the past, this experience is definitely an important stepping stone for the successful traditional musicians of the future.”

The album was recorded and mastered at the renowned Castlesound Studios, Pencaitland, East Lothian.

For further information on the tour, or for accompanying images, please contact the TMSA Young Trad Tour’s project manager, Sophie Bancroft, on 07989 915 302 or sbancroft@btinternet.com

Charlie Stewart – Fiddle (Kinross) – 2017 Winner Charlie is a fiddle and bass player from Kinross-shire. Charlie has been taught by Elizabeth MacClay, Lauren MacColl and Pete Clark and now is studying Jazz bass with Mario Caribe, as well as fiddle with Marie Fielding, at the Royal Conservatoire of Scotland. Having recently gained the title of Young Traditional Musician of the Year 2017, Charlie has also won a Danny Kyle award as part of the duo, ‘Ross Miller and Charlie Stewart’, and reached the semi-finals of the BBC Radio 2 Young Folk Awards in 2016 playing with the harpist, Becky Hill. Charlie can also be found performing with the bands Dosca, Sketch and Snuffbox as well as other projects in Glasgow and further afield.

Mohsen Amini – concertina (Glasgow) – 2016 Winner Mohsen Amini from Glasgow, Scotland is a fast-growing name in the traditional world. Boasted by the Herald as a “Virtuoso”, he’s creating quite a reputation as a concertina player in Scotland. He co-founded multi-award winning trio, Talisk, who after only two months of formation won a Danny Kyle award at Celtic Connections and shortly after won a BBC Radio 2 Folk Award. Their debut album Abyss was shortlisted at the 2016 MG Alba Trad Awards as ‘Album of the Year‘, the same awards where they had previously been nominated for ‘Up and Coming Artists the Year’. Their continued success saw them receive a nomination for the ‘Horizon award’ at the 2017 BBC Radio 2 Folk Awards. Mohsen also founded acclaimed supergroup Ímar at the start of 2016. They, in the space of one year managed to go viral and stack an impressive 11,000 likes on Facebook, an unheard of feat in the traditional music world, which provided a great platform to launch their debut album Afterlight in 2017 which managed to achieve no less that a five-star review on its launch gig at Celtic Connections.

Most recently, Mohsen was nominated as ‘Musician of the year’ at the 2017 BBC Radio 2 Folk Awards making him the first-ever musician to be nominated for this, ‘Instrumentalist of the Year’, at the MG Alba Trad Awards and win the ‘Young Traditional Musician of the Year’. www.mohsenamini.com

Grant McFarlane – accordion (Paisley) Grant McFarlane is a dynamic accordionist who performs and teaches extensively around Scotland and further afield. In 2015, Grant formed the first ever Fèis in his hometown of Paisley with children aged eight-to-18 taking part in instrumental tuition, singing and drama with some of Scotland’s top traditional musicians. His ceilidh band, Scotia, are widely sought after on the dance band scene and perform regularly at events, nationwide. As part of folk ensemble, CherryGrove, he has performed on stages internationally, including performances at the National Celtic Festival in Australia, Sufi Sutra Festival in India and, closer to home, the Tiree Music Festival.

Iona Fyfe – Scots song (Huntly) Aberdeenshire folksinger, Iona Fyfe, has become one of Scotland’s finest young ballad singers, rooted deeply in the singing traditions of the North East of Scotland. At 19 years-old, Iona has established a strong voicing of place in her repertoire and has been described as “one of the best that Scotland has to offer” (Global-Music.de). Whilst continuing her studies at The Royal Conservatoire of Scotland, Iona has gained an FLCM in Scottish Traditional Voice from The London College of Music.

“One of the most sunning voices on the circuit today” (Artree), Iona was a nominee for Scots Singer of the Year at the 2017 MG Alba Scots Trad Music Awards. ‘East‘, her debut six-track EP, was received with great acclaim and has been re-released in German-speaking countries by CPL Music. Growing up within the Traditional Music and Song Association movement, Iona is a regular within the competitive ballad circuit and has won a number of prestigious folksong prizes, including the Greig-Duncan Folksong Competition.

Iona has a number of high-profile appearances under her belt, including performances at The Royal Albert Hall, Glasgow Barrowland Ballroom and a sell-out 2017 Edinburgh Festival Fringe show. Iona has twice been a semi-finalist in the BBC Radio 2 Young Folk Award. Her debut album, ‘Away From My Window’, was launched at Celtic Connections in 2018 and she looks forward to launching a debut duo EP with Aberdeen singer, Cameron Nixon. Iona has enjoyed touring the UK, Italy, Poland, Canada and recently appeared at the Lorient InterCeltique Festival. She is also a TMSA Board member. www.ionafyfe.com

Ella Munro – Scots song (Skye) Ella Munro is a young folk singer hailing from the Isle of Skye taking the folk scene by storm. After studying for five years at the prestigious national centre of excellence in traditional music in Plockton she then went on to gain a place studying scots song at the Royal conservatoire of Scotland.

Ella’s passion for both traditional and contemporary music can be seen in her varied repertoire of scots songs by the likes of Dick Gaughan and Adam MacNaughton (to name but a few) to her self-penned songs, rapidly gaining awareness in the folk scene.

Kim Carnie – Gaelic song (Oban) With a “voice that breathes light and beauty into every note’ (The Living Tradition) Kim was drawn towards traditional music at a young age. While having graduated with a First Class Honours Degree in Law and currently a Children’s TV Presenter on the BBC’s ‘Dè a-Nis?’, 2017 saw her turn towards her voice, and the release of her Debut EP, ‘In Her Company – Na Cuideachd’, featuring her live line-up of Innes White, Megan Henderson, Euan Burton and John Lowrie. Kim is also member of Air Falbh Leis na h-Eòin, the voice of THQ Nordic’s ‘Black Mirror’ trailer and will appear in Netflix’s Outlaw King, a retelling of the story of Robert the Bruce, being released this November.

The group will be joined by accompanist, Owen Sinclair.

After only entering the world of Traditional music at the age of 15, Owen has spent the later part of his teenage years working out ways to combine his musical identities. For him, the tunes and songs rooted in tradition are just components, which can be used to achieve wider emotive and expressive ends.

Owen plays guitars and sings with his quartet, Tannara, they have been performing extensively across the UK over the past two years and released their debut album, ‘Trig’, in summer 2016. “They’ve developed their own group identity, playing smart, imaginative arrangements with verve”. The Herald

As a drummer, Owen also plays with progressive trad band INYAL. Coming together from five different corners of Scotland, Inyal are as influenced by the traditional music of their native land as they are its eclectic underground scene. Their sound is captivating, layering subtle electronics and twisted beats with intricate melodies and enchanting Gaelic song. “Inyal are cutting through the Scottish music scene with a sound that is as fresh as it is original. Their mix of melodic tunes coupled with sympathetic electronics creates an atmosphere that must be experienced live.” (Niteworks).

And for the London Showcase:

Hannah Rarity – Scots song (West Lothian) – 2018 Winner Hannah joined the National Youth Choir of Scotland aged eight and honed her trad music style until beginning the Scottish Music course at the Royal Conservatoire of Scotland in 2012. Since graduating, she has toured internationally with Irish-American traditional group Cherish The Ladies, appeared as a soloist on BBC Scotland’s Hogmanay Live 2014 and 2016 and performed a debut sell-out show at 2017’s Edinburgh Fringe and another this year. She released her debut EP Beginnings in November 2016, with a debut album just released on 2 September this year.

Ryan Young – fiddle (Cardross) Ryan Young from Cardross graduated with an MMus in Scottish Music from the Royal Conservatoire of Scotland in 2016, having previously graduated with a BA first-class honours. As well as being a finalist in the BBC Radio Scotland Young Traditional Musician in both 2015 and 2016, he was twice a finalist in the BBC Radio 2 Young Folk Awards. In September 2016, Ryan began recording his debut album with Jesse Lewis, a three-time Grammy winning producer and the album will be released in 2017. A musical highlight was getting to perform with Dennis Cahill, one of his biggest inspirations, at Feakle festival in Ireland 2015 and again in 2017. www.ryanyoung.scot