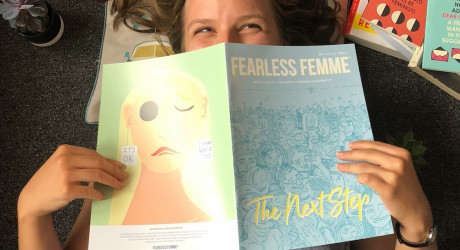 JUST six months after its official launch, Fearless Femme, a grassroots project to improve young women’s mental health, has gone from strength to strength – with the newest magazine attracting the support of First Minister, Nicola Sturgeon, and the news that it’s been shortlisted for a national award.

With universities and colleges across Scotland and the UK heading back this month after a long, hot summer, the next edition of the publication, featuring the First Minister, gives its focus to ‘Next Steps’, centred around life’s transitions and especially aimed at helping young adults with the transition to and from university/college life.

Figures* on mental health and anxiety around higher education paint a stark picture – with over 45,000 students accessing counselling services in Scottish universities over the last five years, which represents a 76 per cent increase in demand.

Fearless Femme focuses on three areas: the production of a digital magazine that showcases the mental health stories and artwork of young women and non-binary people, with a particular focus on ‘surviving university’; an online membership community that welcomes feminists of all genders; and evidence-based research on the mental health of its readers.

It’s recently been nominated for a national award – and received the support this week of The Thick of It star and Social Enterprise UK patron, Chris Addison.

Fearless Femme was set up by former university lecturer and social entrepreneur, Dr Eve Hepburn, after she lost her step-brother to suicide two years ago, having already suffered a breakdown and mental ill-health after a series of traumatic events, including the sudden death of her boyfriend when she was just 19 years-old.

So far, over 200 volunteers have donated their short stories, articles, poems, artwork, comics and videos reflecting on their mental health experiences, in a bid to help others feel less alone – and they have also taken part in Fearless Femme’s research programme, with the first report from the social enterprise due to be published this November.

Fearless Femme is campaigning to improve student mental health services both during and after university, when many students experience a ‘post-graduation’ dip in their mental health. Their policy recommendations include more pre-arrival student mental health support, mental health first aid training for academic and professional staff, greater wrap-around student counselling support, and a more honest narrative in universities about failure and managing expectations.

In this latest edition (its sixth), First Minister Nicola Sturgeon is joined by comedian, Katy Brand, broadcaster Jennie Cook and the University of Edinburgh’s Dr Sara Shinton to give students advice on how to look after their mental health and wellbeing at this important time of their lives.

Set up as a social enterprise, the Edinburgh-based social enterprise runs a skeleton staff, to manage the submissions from a group of voluntary contributors, who all report massive benefits to their own wellbeing from being given a space to talk openly about mental health.

Fearless Femme founder and CEO, Dr Eve Hepburn, said: “We’re honoured to have had a contribution from Scotland’s First Minister and all our other amazing volunteer writers and artists in the latest edition of our magazine, which has gone to from strength to strength since our launch just over six months ago.

“We’re proud to have over 200 voices talking fearlessly about their own mental health journeys and we are humbled to hear from our writers and readers that the online community we’ve created is having a positive impact on their mental health.”

She added: “We’re leading a path to global change. Fearless Femme is being read by thousands of people in over 117 countries around the world and our vision is to become into the leading mental health magazine and creative community in the UK for young people, as we seek to provide an antidote to the growing volume of beauty magazines and social media channels that exacerbate the stress and anxieties of today’s world.

“And our aim isn’t just to change the narrative on mental health – we also want to concretely change the political and policy context in which young adults are able to receive support and help.

“We’ll be doing this by publishing research reports that seek to influence government policy change at the national level through our research findings and recommendations. We believe that together, Scotland can lead the world in making real changes that make a real impact on people’s lives.”

This new addition to Scotland’s strong social enterprise community has recently been shortlisted for a national award – the Social Enterprise Scotland 2018 ‘One to Watch’ award.

Dr Hepburn added: “This is a wonderful recognition of the positive impact we’re having on the mental health of young people, especially those within higher and further education.”

Fearless Femme has also received the support of The Thick of It star and Social Enterprise UK patron, Chris Addison, who said: “Fearless Femme is exactly the magazine the world needs. More than a magazine, actually – a community. And all geared to helping young people deal with life’s challenges and pressures and stigmas, to give them confidence and a voice and to help destigmatize mental health issues. We’ve never needed it more.”

Professor Peter Mathieson, Pprincipal of the University of Edinburgh, Fearless Femme’s institutional project partner, said: “The people of Fearless Femme are doing great work and I am delighted that they link so well with the University’s values, culture, activities and long-term aspirations. Mental health issues are so important and we all want to do everything we can do to identify and support the needs of members of the University family.”

Copies of the magazine will be handed out to Freshers over the coming weeks and a range of helpful online content can be found at www.fearlessfemme.co.uk.

Writing in the magazine, First Minister, Nicola Sturgeon, talks about her own university life, and things she does now to help her wind down and put her thoughts in order.

She says: “Recent years have seen a heightened awareness of mental health in society, and that is to be welcomed – and, as First Minister, I’m particularly pleased that young people are playing a key part in considering how we improve our mental health.

“One of my biggest passions is improving the life chances and the wellbeing of Scotland’s young people. 2018 is the Year of Young People in Scotland – with a huge range of events across Scotland to help us celebrate the successes of our young people, and to help us consider what more we can do to support them.

“There are a lot of people and organisations working tirelessly across Scotland to address the stigma and discrimination associated with mental health. It is a huge issue – and I know it’s a huge issue for young people – and I am confident that together we can continue to make real changes.”

Broadcaster, Jennie Cooke, reflects in the magazine about how life changing having a baby can be – and how to deal with Imposter Syndrome during big life changes.

“Every time I find myself frozen with fear or wondering if I even know what I’m doing I reach out to other people. I talk through how I’m feeling or whichever particular knot I can’t untie and I allow them to guide me through it.

“Or, I imagine what I would say to a good friend who came to me with the same doubts. And I give myself a break. And whenever that nasty Imposter Syndrome comes calling, I just pretend I can’t see it and repeat to myself ‘fake it till you make it’ and ‘why not me?”

Writer, comedian and broadcaster, Katy Brand, gives advice on taking the next step: “I have changed my life many times in many different ways, big and small. It has been hard, but with every shed skin I have emerged bolder and brighter. It doesn’t always work perfectly, mistakes are made, there are regrets.

“But there is no regret as bitter as that which comes from doing nothing. So if you feel the desire to change yourself, your career, your friends, your partner, your surroundings, just do it. You are your greatest strength, and your new skin will be stronger and more flexible than ever.”

In addition, this month’s Issue features articles on: cultivating resilience at university; addiction and developing a healthy relationship with alcohol during Freshers; how to budget; managing mental health in the workplace; post-traumatic growth; and Fearless Femme’s research on mental health.

Fearless Femme is a non-profit mental health project, magazine, research hub and creative community empowering feminists of all genders to find a better mental space. The aim of Fearless Femme is to empower young people to overcome stress, anxiety and the challenges that life throws at them. The social enterprise launched in February this year at an event, attended by the Minister for Mental Health, the principal of The University of Edinburgh, and leaders in the worlds of mental health, equalities and education.

As a social enterprise, Fearless Femme is being funded by the Scottish Government and the European Social Fund to conduct a 12-month pilot project in partnership with the University of Edinburgh on supporting the mental health of young women from 1st January 2018 – 31st December 2018. Fearless Femme was legally incorporated as a Community Interest Company in May 2017, and since commencing operations in January 2018 it has employed a small, part-time team of six staff based in Leith who are working to improve the mental health of young people.