Media release: Forth 1 breakfast team hope to top the charts with single, ‘Break Your Heart’ 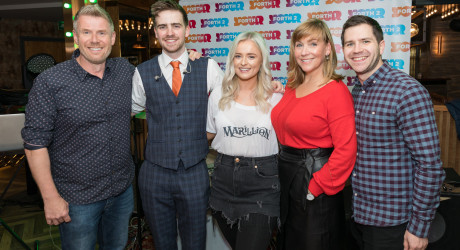 FORTH 1’s Boogie might wake listeners up by playing the biggest hits, but the Boogie In The Morning presenter has now gone one step further.

Following a rash announcement in January when Boogie asked how hard can it really be to make a hit single, presenters Boogie and Arlene and producer, Marty, were challenged to do just that and see if they could create a chart-topper.

What followed were months of preparation and plenty of listener involvement – with listeners asked to suggest a classic hit that could be produced into a dance track. After sifting through dozens of suggestions, the breakfast team opted for 80s hit, ‘Kayleigh’, by Marillion, thanks to its local connection with lead singer, ‘Fish’, living in East Lothian.

Once the song had been selected, the breakfast team needed to find a producer to turn the rock ballad into a dance anthem. They recruited Arlene’s son, Robbie Hutchison, a music production student at Edinburgh’s Napier University to work his magic on the track and the band BAMR (Boogie, Arlene, Marty and Robbie) was born.

Arlene said: “We worked with Robbie to come up with a sound that we liked, making sure it was something that would fit in well with the songs we play on the station. We wanted it to be upbeat and modern so a fair bit of work went into the track.

“It was brilliant working with my son and seeing him in action – some of the best music collaborations have come out of family partnerships – just look at The Jackson 5 and Oasis.”

With the track produced, Forth 1 listeners helped to recruit a vocalist, with singers calling in to audition live over the phone on the breakfast show. Nine potentials were then brought face to face with Boogie, Arlene and Marty in true X Factor style with 2016 X Factor judges’ houses contestant, Caitlyn Vanbeck, from Tranent, selected to perform the vocals on the track.

Caitlyn said: “I was over the moon to be picked as the vocalist for the re-make of ‘Kayleigh’ now ‘Break Your Heart’. As soon as I heard the track I loved it and I could really see what Boogie, Arlene and Marty were trying to achieve. I’m so happy with what we’ve created and how we’ve turned an ’80s song into something relevant and relatable for today’s audience. I’m looking forward to hearing listeners’ reactions as it’s been a team effort with them every step of the way.”

Boogie said: “What a journey this has been. Who knew a comment in January could lead to all this? This is what I love about our listeners – the fact that together, we can create something totally unique.

“The original song ‘Kayleigh’ never made it to number one, it peaked at number two, so we are really hoping that we can go one better and land the top spot with ‘Break Your Heart’, that really would be a dream come true. So come on people of Edinburgh, the Lothians and Fife, we need your support to make history, and together we can do it!”

The single ‘Break Your Heart’ is officially released today (Friday 28 September) and is available on iTunes, Apple Music, Spotify, Amazon, Deezer and YouTube:

Boogie In The Morning runs every weekday morning from 6am to 10am on Forth 1 across Edinburgh, the Lothians and Fife.