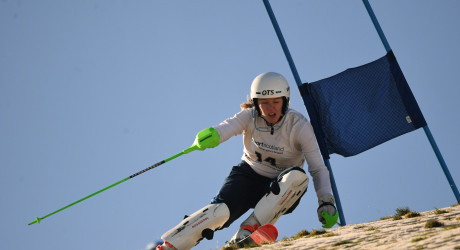 SCOTS skier, Nicole Ritchie, added the British Giant Slalom title to the Slalom title she had won the previous day – with a dominant win that saw her fastest on both runs.

QTS Youth Athlete, Ritchie, has bags of experience down the Hillend, Edinburgh, course but had been beaten by Eilidh Ryan at the Scottish Championship Giant Slalom earlier in the month and was taking no chances.

Ritchie set her stall out on the first run but could not shake off the rest of the field.

Jenny Davies was just ahead of the impressive young Irish racer, Olivia O’Brien.

Nicole Shering (2018 winner of the Welsh championships) put the disappointment of crashing in the run in to the finish in the slalom behind her, with a determined second run to take the lead, in front of Holly McKey, with six to go.

O’Brien had been the leading under-16 racer after the first run but could not live with the speed generated by either Shering or McKey and dropped out of the reckoning.

Next down was Davies (Eng) and she posted a new fastest time to take the lead but this did not last as Eilidh Ryan rediscovered her form to take the lead with just three to go. A place on the podium was possible after this run.

Winthrop, an accomplished ski-cross racer during the winter, had a deficit of 0.36 to Ritchie but an advantage of almost a quarter of a second over Ryan from the first run.

Her second run was going really well until she crashed and flew through the air in the run in to the finish. With ski-cross being a rough and ready discipline, Winthrop had the intelligence to drop her hand as she crossed the line to break the beam. While the mistake cost her dear, she dropped down to fourth with two to go. Winthrop was off to hospital with a suspected broken wrist…

With the lure of a podium dangling in front of her, Taylor gave it her all. There is a fine line between being on the mark and trying too hard and Taylor just crossed that mark in her effort to go for the win and she dropped down behind Ryan.

Had you asked Ryan if she thought she would be on the podium after the first run, she would probably have said no but her determination on the second run had dragged her back into contention. The race is never over until the end.

Emilia Dempster and Heather Ballantyne took the under-12 and under-10 race wins.