Media release: Over £919,000 support for cultural activity across Scotland 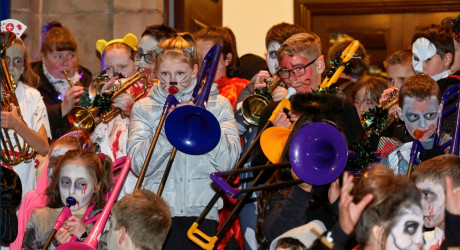 Over £919,000 support for cultural activity
across Scotland

£919,218 of National Lottery Funding has been awarded to 44 recipients through Creative Scotland’s Open Project Fund, including individual artists, musicians, writers, theatre makers, festivals and organisations working across the arts, screen and creative industries.

Open Project Funding supports individual artists and organisations to explore, realise and develop their creative potential and widen access to their work through the research, development, production and presentation of work across all art forms.

Classical guitarist Sean Shibe and composer Lliam Paterson have received funding to commission and record new work for choir and guitar in collaboration with the Choir of King’s College London.

Aidan O’Rourke, of Lau, commented: “This support will allow us to create our fifth studio album. The funding gives us enough time in the studio to explore, develop and finesse new ideas and to work alongside an incredibly inspiring producer.”

Funding received by visual artist Steven Fraser will be used for the creation a new video documentary installation, What It Feels Like, which will explore and profile mental health issues.

Steven Fraser commented: “I am looking forward to developing this installation which will expand on the story and themes of my  short-animated documentary that won the International Documentary Award at the Focus on Ability Film Festival in Sydney Australia. The new work will  present that documentary’s unique animation style in a new context.”

Award-winning writers John and Martin Kielty have received funding towards the development of theatre production The Edinburgh Seven.

The new work tells the story of the first female undergraduates in the UK to be admitted to study medicine at Edinburgh University, although they were ultimately prevented from graduating, the campaign they fought gained national attention and won them many supporters, including Charles Darwin.

Funding awarded to performer-director Al Seed will be used towards the creation of a new work, based upon the story of Faust, A Figure Came All Dressed in Black and featuring physical theatre, storytelling, live music and stand-up comedy.

Director and choreographer Kally Lloyd-Jones of Company Chordelia has received funding towards the creation of new work The Chosen, exploring the subject of death.

Kally Lloyd-Jones, of Company Chordelia, commented: “I am so delighted to be starting work on a new piece and to have the opportunity to explore this work before embarking on a final production process. The subject of death is personal and particular but of course also universal, so I want to create a piece, along with the dancers, that will communicate something of our experiences.”

Funding will enable Glasgow based author Oliver Langmead to undertake a writer’s residency at the European Astronaut Centre in Cologne.

Kirsty Russell commented: “As an artist living in the North East of Scotland, Syllabus IV offers me valuable opportunity to connect with peers, arts professionals and organisations across the UK.”

Funding has enabled musician Dean Owens to undertake his first official tour of the USA. The tour is a direct result of his 2017 performances/networking at Showcase Scotland’s The Visit and his showcase at Americanafest in Nashville – both supported by Creative Scotland.

On undertaking the tour in October, Dean Owens commented: “I made so many great new contacts and laid down some very solid foundations for my future visits. I’m very grateful to Creative Scotland for their support.”

Following its sell-out tour in February 2018 Theatre Company Wonder Fools have received funding to enable a Scottish tour of 549: Scots of the Spanish Civil War in Summer 2019. The story follows four miners from Prestonpans, East Lothian, as they travel across Europe to fight in the Spanish Civil War.  The tour commemorates the 80th anniversary since the end of the conflict.

Producer, Steph Connell, said: “As a young company this funding is critical in allowing us to create and tour ambitious work and connect with new partners and audiences. This support will allow us to take the show across Scotland in both theatres and community settings to help celebrate and remember the heroes that came from those communities and keep one of Scotland’s forgotten stories alive.”

Funding has been awarded to a number of organisations and companies presenting artist programmes across Scotland:

Floris Books 2019 publication programme will include the Kelpies imprint of Scottish books for children from ages one to 16.

The Scottish Glass Society will present a programme of exhibitions, workshops, tours, events and publications in celebration of their 40th anniversary.

Tricky Hat’s mature theatre initiative, The Flames, will see participants collaborate with professional artists to create multimedia theatre pieces based on their own ideas and life experiences.

Fiona Miller, of Tricky Hat Productions, commented: “At Tricky Hat, we are delighted to get further funding that will enable us to spread The Flames to new areas in Scotland. And to build on our successful collaborations so far.”

Ullapool Dance’s North West Highlands Dance for All will offer a dance programme for all ages and abilities.

Dundee Jazz Festival, SEALL Festival of Small Halls in Orkney, Galoshans Festival in Inverclyde, East Neuk Festival in Fife and Take Me Somewhere in Glasgow have all received funding towards their 2018/19 programmes.

East Neuk Festival artistic director, Svend McEwan-Brown, commented: “East Neuk Festival is local and global – drawing musicians and music lovers from all over the world to Fife. This will be the 15th festival, and we continue to develop and broaden our range further every single year. This support enables us to create more opportunities for all kinds of musicians – from top international stars to budding talents in our community – to perform to the fantastic East Neuk Festival audience.”

Lauren Grech, of Galoshans Festival, commented: “Galoshans Festival 2018 has come together as a vibrant and exciting community event for all ages. We welcomed performers and artists from Glasgow, Dundee, Alloa and Findhorn amongst others to join us at our exhibition and parade which celebrated the old tradition of ‘Going Galoshans’ – something that started right here in Greenock before it was exported to America and became the global event it is today. We’re grateful for the support from Creative Scotland that allowed us to bring Hallowe’en home to Inverclyde.”

Iain Munro, acting chief executive at Creative Scotland, said: “It’s terrific to see such a high number of emerging and established individual artists and creative practitioners being supported to develop their practice through these National Lottery funding awards, helping to increase access to cultural activity for a wide variety of participants and audiences across Scotland.

“This round will see the creation of new work from Lau, classical guitarist Sean Shibe, choreographer Kally Lloyd-Jones, award winning writers John and Martin Kielty and performer-director Al Seed, amongst others. We are also pleased to support the artistic programming of Scottish Glass Society, Tricky Hat Productions, Outspoken Arts Scotland and Ullapool.

“Dundee Jazz Festival, SEALL Festival of Small Halls in Orkney, Galoshans Festival in Inverclyde, East Neuk Festival in Fife and Take Me Somewhere in Glasgow have also received funding towards their artistic programmes.”

Open Project Funding is available to a wide range of organisations and individuals working across Scotland in the arts, screen and creative industries. It supports a broad spectrum of activity including creative and professional development, research and development, production, small capital requirements, touring and collaborations, festivals, arts programming, audience development, etc. A full list of activities supported through this route is set out in the Open Project Funding application guidance. Support is available for projects of different scale and duration with the maximum period of award being set at two years. Awards are made in the range £1,000 to £100,000 (or up to £150,000 by exception). Details of the Open Project Fund and all other Creative Scotland funding can be found on our website at http://www.creativescotland.com/funding/funding-programmes/open-project-funding

Creative Scotland is the public body that supports the arts, screen and creative industries across all parts of Scotland on behalf of everyone who lives, works or visits here. We enable people and organisations to work in and experience the arts, screen and creative industries in Scotland by helping others to develop great ideas and bring them to life.  We distribute funding provided by the Scottish Government and the National Lottery. For further information about Creative Scotland please visit www.creativescotland.com.  Follow us @creativescots and www.facebook.com/CreativeScotland

Creativity Matters: The arts, screen and creative industries in Scotland deliver real benefits and make a real difference to all our lives regardless of who we are or where we live. Film, theatre, literature, dance, music, visual art, video games, craft, and the commercial creative industries all contribute to a flourishing society, to our education and learning and to our skills, jobs and economy.

Public funding for the arts, screen and creative industries, through both the Scottish Government and through the National Lottery, helps make life better in Scotland – better for us all as individuals, as communities and as a nation.

As we say in our ten-year plan Unlocking Potential, Embracing Ambition we want Scotland to be a place where the arts, screen and creative industries are valued and recognised, where artists and creative people can flourish and thrive, and where everyone, everywhere, is interested and curious about creativity.