Media release: Premiere of The Ballad of Muriel Spark 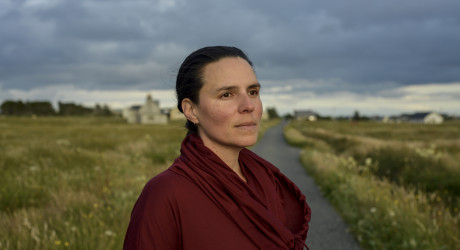 AWARD-winning composer and performer, Jessica Danz, has written a new work for violin and string quartet inspired by the poetry of Muriel Spark.

The new composition will be premiered at the Scottish Poetry Library in Edinburgh at 7pm on the 14th November.

Jessica will appear as a solo violinist alongside the Brodick Quartet, an ensemble comprised of four of Scotland’s most outstanding young string players.

The project is supported by Creative Scotland’s Muriel Spark 100 fund, as part of the centenary celebrations for Dame Muriel Spark, one of Scotland’s finest and most internationally respected writers.

Jessica Danz on The Ballad of Muriel Spark: “I’ve always been powerfully drawn to the relationship between literature and music, and my earliest compositions were settings of poems.

“Through creating scores for theatre and dance I’ve developed a strong interest in the art of storytelling. I’ve selected nine of Spark’s poems to respond to, exploring their characters and voices, and their individual structures and rhythms.

“The breadth and variety in Muriel Spark’s poetry offers many fascinating possibilities for a composer.  Every poem has suggested a unique musical approach, and inspired different textures and forms – the nine movements include a song without words, a theme and variations based on the fragment of an ancient Gaelic lament, and a mad, melodramatic waltz.“

Jessica Danz is an award-winning performer and composer based in Scotland. A vocalist and versatile multi-instrumentalist, she brings together contemporary classical and folk-noir elements in an experimental, virtuosic style.  Known for her finely crafted, haunting songwriting, she writes and performs solo material for combinations of voice, violin and piano, as well as creating ensemble works and live scores for theatre, dance and silent film.

Originally from Perth, Western Australia, Jessica moved to Scotland in 2017.

While based in the Outer Hebrides she was commissioned by An Lanntair’s Faclan Festival to create a live piano score for the early Icelandic documentary Ísland í Lifandi Myndum, and the work was then installed as part of the 2018 exhibition SSA & VAS at the Royal Scottish Academy.

Jessica has performed in locations as diverse as mountains, sailing ships, sea caves and ancient churches, and recent solo performances include the Vertex Festival, Faclan Festival, and Lews Castle.  2019 projects include the release of several new albums and the development of a chamber opera.

About the Brodick Quartet:

The Brodick Quartet comprises of four of Scotland’s sensational young string players. Having individually studied at the Royal College of Music, Royal Northern College of Music and the Royal Conservatoire of Scotland the quartet met post-study whilst working in Glasgow in groups such as BBC SSO, Scottish Ensemble, Scottish Ballet, Scottish Opera, RSNO and London Concertante.

Formed in 2016, the Brodick Quartet’s recent performances have included Aberdeen Sound Festival, Cottiers Chamber Project, and a UK premiere. They are passionate about attracting audiences who might not normally approach a classical concert and each have their own broad musical tastes outside the classical genre.

MEDIA RELEASE issued by Alex Boyd You too can share your stories (aka press or media releases), on this site. Email here for more information.