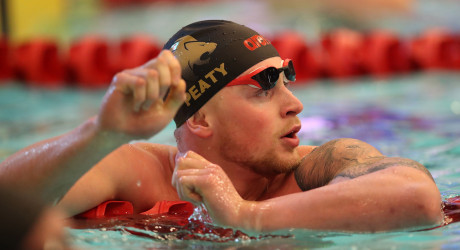 SOME of the best swimmers from the UK and abroad will compete at the Edinburgh International Swim Meet (EISM) next month (15-17 March 2019).

Reintroduced to the UK swim calendar five years ago, the annual meet now regularly hosts the best in GB swimming, challenged this year by the Danish and Spanish national teams and top individual and club swimmers from Norway, Denmark, Austria, Sweden, Germany and France – to name but a few.

Breaststroke interest will undoubtedly centre on World record holder, Adam Peaty, who, along with his Loughborough National Centre team mate, James Wilby, will hope to keep Stirling University’s Ross Murdoch behind them.

Event organisers, the East District of the Scottish Amateur Swimming Association has developed the meet in partnership with the University of Edinburgh, City of Edinburgh Council and TYR to bring world-class swimmers to the Scottish capital. The meet provides a first opportunity this year to assess preparations for the FINA World Championships in Gwangju, South Korea.

“We are delighted again to welcome the best swimmers in Europe to the Edinburgh International Swim Meet including, for the first time this year, top multi classification swimmers drawn from across the UK who will compete in a number of events. The prize money this year tops £12,500, and we are grateful to our main partners the University of Edinburgh, City of Edinburgh Council and TYR for their generosity is supporting the event.”

“The University of Edinburgh is thrilled to be a main sponsor of the EISM for the fifth year. Swimming is one of the university’s leading sports and we see EISM as an exciting way to showcase our world-class Performance Sport Programme and the university, while also supporting SASA East in delivering another magnificent sporting spectacle for the city.“

Frank Ross, Lord Provost of the City of Edinburgh, welcomed the event, stating: “Edinburgh is one of the most exciting and beautiful capital cities in the world, with its unique history and culture attracting millions of visitors each year. It is also a city of great sporting traditions and has hosted many major sporting events in recent times, including swimming and diving competitions. The Royal Commonwealth Pool, overlooked by Edinburgh’s ancient volcano Arthur’s Seat, will once again provide an impressive backdrop for this event, and I am sure will give a real sense of occasion to all, whether competing or watching.”

TYR will provide prizes to those competing and event merchandise which can be pre-ordered from the event website https//:eism.org.uk in March.

Demand for spectator tickets is expected to be high. Tickets priced from £5-8.00 will go on sale on 23 February. Details of how to order tickets can be found on the event website.

Heats take place in the morning and afternoon each day with finals at night. The finals programme is as follows:

The Edinburgh International Swim Meet has a long history in the international swimming calendar, having first taken place in the 1980s. After a three-year hiatus leading up to the 2014 Commonwealth Games, the meet returned to the RCP in 2015 and has since become hugely popular, with a variety of international teams and world-leading athletes competing.

The official hashtag for the event is #eism2019

The event will be streamed live at https://www.eism.org.uk

Live results will be available also on Meet Mobile and at http://www.swimscotland.co.uk/