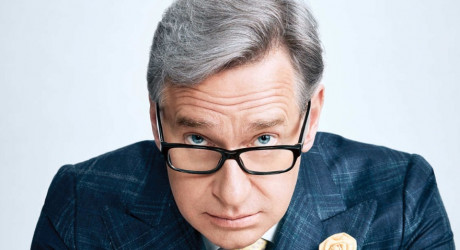 PAUL Feig, creator of the hit series, Freaks and Geeks, and director of Academy Award®-nominated film, Bridesmaids, will deliver the prestigious Worldview Address at the Edinburgh TV Festival, it was announced today.

The writer and director will bring his unique perspective on the global television and film landscape. Feig was responsible for executive producing and directing Emmy® Award-nominated episodes of the US version of The Office. He received two Emmy® nominations for writing Freaks and Geeks – the series he created and was later named in Time magazine’s 100 Greatest Shows of All Time.

He will discuss his work on a number of comedies- from Arrested Development, Weeds and Nurse Jackie – to his directing roles on Mad Men, 30 Rock and Parks and Recreation, as well as his numerous films, including The Heat, Spy, Ghostbusters: ATC and last year’s A Simple Favor.

On giving the 2019 address, Feig said: “My wife and I first came to the Edinburgh Festival almost 30 years ago and it quickly became my goal to one day be a part of it.

“And so to be delivering the Worldview Address for the festival that is at the heart of the British TV industry is quite a dream come true. I’ve had a lifelong love of UK television and so this is truly an honour for me.”

The film was penned by Emma Thompson and Bryony Kimming and features the songs of George Michael. As well as serving as director, Feig produced for his Feigco Entertainment, alongside Jessie Henderson.

Feig has recently put his support behind the 4% Challenge, announced by Dr. Stacy L. Smith from the USC Annenberg Inclusion Initiative.

The challenge urges filmmakers to make a commitment to work with a female director within 18 months. Smith revealed the challenge during a panel at Sundance and confirmed that Nina Jacobson, Angela Robinson, Paul Feig, Amy Schumer, and Franklin Leonard have agreed to the challenge.

Further to the 4% Challenge, Paul is an ambassador for Women in Film’s ReFrame programme, has launched a digital company, Powderkeg, and, through collaboration between Powderkeg and writer-producer, Sameer Gardezi, has launched the emerging voices writers’ programme, Break the Room.

Powderkeg’s mission is to create directing opportunities for women, people of colour and the LGBTQ community. The collaboration with Gardezi sees the Break the Room initiative taking this mission and bringing diverse voices together with community thought leaders for a week-long writers’ retreat.

Break the Room has already enacted two of these retreats – one in Los Angeles and one in Albuquerque – with another set to follow in Portland. The Los Angeles room produced a series called East of La Brea, about two working-class Muslim women in L.A., which is set to premiere at SXSW next month.

Festival executive chair, Graham Stuart, said of Feig’s Worldview Address: “Edinburgh 2019 will be graced by an extraordinary man… blazing a trail for gender equality on and off screen. Paul Feig will bring a remarkable Hollywood resume and brilliant wit and humour to this year’s delegates. They will be highly entertained and almost certainly converted.”

The festival has featured a host of heavyweight Hollywood creators and executives in the past including South Park creators Trey Parker and Matt Stone, writer Aaron Sorkin, The Wire creator David Simon and Breaking Bad’s Vince Gilligan, as well as British talent including Michaela Coel, who gave the prestigious James MacTaggart Lecture in 2018, Joanna Lumley, Vicky McClure and Michael Palin.

As a festival and a charity, the Edinburgh Television Festival is committed to helping young people from all backgrounds gain access into the TV industry. It runs two young talent schemes, Ones to Watch and The Network.