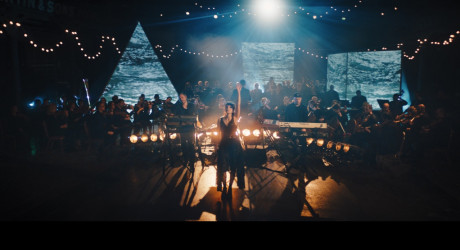 A STUNNING new musical collaboration between Chvrches and the BBC Scottish Symphony Orchestra will be the first content to be broadcast on the new BBC Scotland channel.

The globally-renowned Scottish band perform their international hit song, Miracle, in a specially-created new arrangement, alongside the entire SSO, amidst a visual celebration of contemporary Scotland.

Chvrches’ singer, Lauren Mayberry, will be the first voice to be heard on the channel as it goes out at 7pm, on launch night Sunday, February 24, in this special performance film, entitled Beginning.

Tony Nellany, channel manager and commissioning executive, said: “This exclusive performance for BBC Scotland is a terrific celebration of creativity and culture and a wonderful way to open Scotland’s new channel.

“It is a unique collaboration between synth pop and classical music and it is a visual and aural treat. It is a fantastic celebration of Scotland, its people, its landscapes and its talent.”

The two-minute-and-40-second film, Beginning, is a BBC Multiplatform Productions and Forest of Black co-production. As well as the performances by the musicians, it features images of Scottish people, iconic places, and landscapes from across the country.

Arranger, Paul Campbell, and Chvrches’ Iain Cook worked together to create the instrumentation to harmonise the song between the band and 76-strong contingent of the BBC Scottish Symphony Orchestra  encompassing strings, woodwind, brass and percussion.

Iain Cook, of Chvrches, said: “We were asked to do this with the BBC SSO  and immediately jumped at the opportunity. First and foremost, because of the prestige of being able to launch the new BBC Scotland channel and also from a musician’s point of view, getting to work with an incredible orchestra and to hear our song arranged by a really talented orchestrator. The whole thing was appealing to us on many levels.”

Paul Campbell, who also conducted the BBC SSO for this project, said: “Personally, it’s always a real joy to collaborate with talented creative people across the arts. Director, Oscar Sansom’s clear and vibrant vision for the film was totally infectious from the outset, as I crafted the musical build in the orchestra around phenomenal visuals of modern Scotland.”