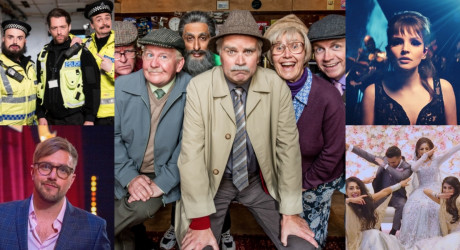 THE new BBC Scotland channel has made a strong start, attracting record digital audiences for its opening night schedule.

The £32m channel notched up five out of the top ten most-watched programmes across all channels in Scotland – Still Game, two episodes of A Night at the Theatre, Burnistoun Tunes In and The People’s News.

Still Game, the sitcom featuring the antics of pensioners Jack and Victor, pulled in the highest-ever ratings for a digital channel in Scotland, attracting almost 700,000 viewers.

And across the evening BBC Scotland had an average share of 13 per cent, making it the third most-watched channel in Scotland, behind BBC One and ITV1. It also reached more 16-34s in Scotland than any other channel.

Between 9pm and midnight, BBC Scotland’s share moved ahead of ITV1, making it the second most-watched channel during this time.

On social media, Still Game was trending across the whole of the UK for a large part of the night, competing with The Oscars and football stories.

Steve Carson, head of Multi-platform Commissioning BBC Scotland, said: ‘‘This is a strong start for the new channel and we’re delighted that viewers have come to us in such significant numbers for our opening night’s schedule.

“Our aim is to build a channel which resonates with audiences across Scotland through relevant and compelling content.  We appreciate that ratings will settle down over time, but we are encouraged by the very positive audience feedback that we’ve had for our first night.”

The first night opened with a specially commissioned short film featuring Scottish band Chvrches and the BBC Scottish Symphony Orchestra. Chvrches’ singer, Lauren Mayberry, was the first voice to be heard on the channel, performing the band’s song, Miracle, accompanied by images of Scottish people, places and landscapes.