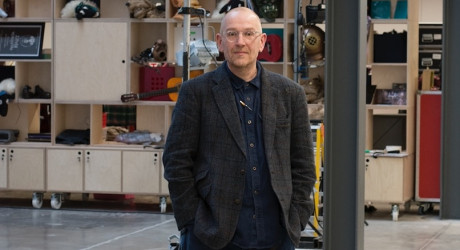 Colony of 150,000 leafcutter ants will star in the upcoming production, which takes over Glasgow’s Tramway from 27 June to 06 July 2019

The production is the latest from the terrifying, horrifying, exciting, mysterious mind of the company’s new associate director, Stewart Laing

Opening performance at Tramway, Glasgow on Saturday 29 June at 7.30pm

FOLLOWING an extensive casting process, the National Theatre of Scotland is delighted to announce that 150,000 leafcutter ants have been chosen to join the company of upcoming production, Them!, which takes over Glasgow’s Tramway from 27 June to 06 July 2019.

The industrious cast members will help to transform Tramway into a suitably eerie setting for the show, partly inspired by a ‘50s B-Movie classic of the same name.

In terms of numbers, if not stature, the cast dwarfs those of previous participatory productions such as Pages of the Sea, SHIFT, and Granite, and marks the first time the company has engaged such a large number of non-human performers. The cast has been scouted, auditioned, and supplied by Andrew Stephenson, one of the world’s leading experts in leafcutter ant husbandry.

“I’m only just getting my head around this! It’s an ambitious project on a grand scale. My ants may not be 20 feet long but they will punch above their weight and I am sure they will adapt to thespianism as consummate professionals. They have spent sixty million years preparing for this production. I can’t actually see them rehearsing in their nest but I do detect a spring in their step now as they move around!”

Them! is based on the classic creature-feature of the same name, released in 1954, which sees a nest of giant irradiated ants attacking Los Angeles. The film promised cinema-going audiences, ‘Terror, Horror, Excitement, and Mystery!’, and went on to become one of the defining science-fiction films of the era.

This stage show will transport the audience onto the set of a live TV chat show. The lights are up, cameras are rolling, the host meets their guest, and the house band perform. Race and class and cultural identity come to the fore. But everything keeps on changing. Time and space shift and the audience changes from silent observers to active participants at the heart of the action.

Them! is a visionary new performance event from Stewart Laing and long-term collaborator, Pamela Carter, tackling the nebulous nature of identity in a changing world. In a performance propelled by music, television, film, and dynamic theatre-making into one exciting event, expectations will be subverted from beginning to end.

The show will premiere at Glasgow’s Tramway, transforming the space into a performance space where anything can happen.

This will be Stewart’s first project in his new role as associate director with the National Theatre of Scotland. He has previously worked with the company on the ambitious meta-theatrical event show, Paul Bright’s Confessions of a Justified Sinner, which was a success on its premiere at tramway in 2013 and performed as part of the Edinburgh International Festival in 2015. He is also artistic director of Untitled Projects.

Join the conversation #Them

He originally trained as a theatre designer at Central School of Art and Design in London. He has worked extensively as a theatre designer throughout the UK and internationally. He has designed for the West End and Broadway, winning a Tony Award for his work on the musical Titanic. His most recent designs include the epic production of The Hairy Ape at The Park Avenue Armory in New York.

Stewart is also artistic director of Untitled Projects, which he formed in 1998. Recent Untitled Projects include: The End of Eddy (2018): The first English language stage adaptation of Edouard Louis’ best-selling French novel. Directed by Stewart Laing and adapted by Pamela Carter, the show was made with the Unicorn Theatre for young people. Paul Bright’s Confessions of a Justified Sinner (2013): A co-production with National Theatre of Scotland, Tramway and Summerhall, the production was part of the Dublin Theatre Festival 2014, Ystad Theatre Festival 2014 and the Edinburgh International Festival 2015. The Salon Project (2011 + 2013) was originally presented in a co-production with the Traverse Theatre in Edinburgh. A second edition of The Salon Project was presented in 2013 at the Citizens Theatre and at the Barbican in London as part of SPILL Festival of Performance. Other productions for Untitled Projects include: J G Ballard Trilogy (2000); blind_sight (2004); Slope (2006); An Argument About Sex (2008); and Slope Redux (2014).

Pamela is a playwright and dramaturg. Her plays include: Lines (Yard Theatre); Fast Ganz Nah/Almost Near (Theater Dresden); Skåne (Hampstead Theatre; winner of the New Writing Commission at the Berliner Festspiele Stückemarkt in 2012); What We Know (Traverse Theatre); Wildlife (Magnetic North Theatre Co). Her work with Stewart Laing includes: The End of Eddy, Slope, Paul Bright’s Confessions of a Justified Sinner, and An Argument About Sex (After Marivaux).

Since 2010, she has written for the internationally-renowned Swedish artists, Goldin+Senneby. She also writes for dance and opera, and has recently adapted a Don Delillo short story for composer, Lliam Paterson and Scottish Opera, and is currently writing a music theatre piece based on the true story of a group of London schoolboys lost in the Black Forest in 1936, for Theater Freiburg in Germany. As dramaturg and writer with Vanishing Point Theatre, she has made the award-winning Interiors, Saturday Night, and Tomorrow.

She has also made work for the National Theatre of Scotland, Scottish Dance Theatre, Traverse Theatre, Tramway, LIFT, the Young Vic, Hampstead Theatre, and Malmö Opera House amongst others.

The National Theatre of Scotland is dedicated to playing the great stages, arts centres, village halls, schools and site-specific locations of Scotland, the UK and internationally. As well as creating ground-breaking productions and working with the most talented theatre-makers, the National Theatre of Scotland produces significant community engagement projects, innovates digitally and works constantly to develop new talent. Central to this is finding pioneering ways to reach current and new audiences and to encourage people’s full participation in the company’s work.

With no performance building of its own, the company works with existing and new venues and companies to create and tour theatre of the highest quality. Founded in 2006, the company, in its short life, has become a globally-significant theatrical player, with an extensive repertoire of award-winning work. The National Theatre of Scotland is supported by the Scottish Government.

MEDIA RELEASE issued by NTS. You too can share your stories (aka press or media releases), on this site. Email here for more information.