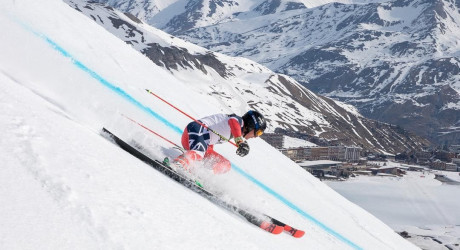 Owen Vinter skied sensationally throughout the week and was crowned the men’s overall champion, winning both the Fedden Cup and the Spence Cup as the highest-scoring under-18 at the British Alpine Championships.

Owen, from Glasgow Ski & Snowboard Centre in Bellahouston Park, has won his national championship title several times over the years, this year winning a record 11 trophies and 21 medals, over eight events which was topped off with the men’s overall championship title.

Owen was lost for words with his achievements and very grateful to the support round about him, including Pinnacle Sports Group, Rossignol, Glasgow Ski Racing and Ambition Racing.

Owen said: “I am delighted to be crowned the men’s overall champion and represent Scotland. The amount of planning, time, training and effort doesn’t just happen overnight, and I would like to thank my ski coaches at GSR and Ambition, fitness coaches, Rossignol and Pinnacle Sports Group which makes this fantastic result a team effort.”

After a well-earned rest, Owen will restart his summer training in preparation for next season where he aims to climb the world rankings and gain selection to the World Junior Championships 2020.